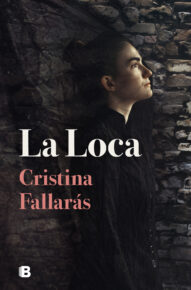 A novel about XV century Spanish queen Joanna of Castille, lock down in a royal convent and declared insane, as so many women have been throughout history and they still are nowadays.

In a perfect dialogue between the present and the XV century, Cristina Fallarás recreates the life of a woman whose story many share.

When women tell history, everything changes.

“From the time her father locked her up until her death, Juana the Mad, Queen of Castille, Queen of Aragon, Valencia, Mallorca, Navarra, Naples, Sicily, and Sardinia, Countess of Barcelona and Duchess Consort of Burgundy, remained shut up in a room in Tordesillas. Repeat after me: 46 years. 552 months. 2,422 weeks. 17,094 days. 410,256 hours. Locked up even though she was queen. During her imprisonment, Michelangelo painted the Sistine Chapel, Luther unleashed the Protestant Reformation, and Machiavelli published The Prince. Memorize this, there are facts here that must be recollected and handed down.”