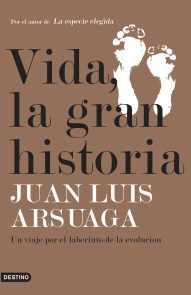 “Arsuaga is one of the world's leading experts on human evolution, as well as a prestigious scientist and a natural born communicator.” Ixone Díaz Landaluce, ABC

“We love that wise people explain things to us when they do it in an interesting and affordable way. That is what makes Arsuaga’s new book such a  wonder: a luminous treatise on life, the universe and human existence.” Víctor M. Amela, La Vanguardia

“A look into our past to predict our future, giving us a complete analysis of the uncertain paths that we, as human species, will follow.” J. Ors, La Razón

Faced with any big historical fact, it’s perfectly natural to wonder whether it’s the result of an inexorable process, or whether things might have turned out quite differently or perhaps never even happened at all. Clearly, this line of reasoning can be applied to evolution too. Was life on Earth inevitable? Was it bound to result in an intelligent and technologically advanced species in the end? Was it just a matter of time (and a very long wait - more than three and a half thousand million years)? How much in our evolutionary history was pure chance and how much was inescapable?

There are obvious philosophical implications to these questions. How would you react to the news that - as science fiction would have us believe - the universe is teeming with life and there are civilizations just like ours on countless other planets? How would you feel about finding out we’re not so special after all, certainly not the centre of the universe, but just one little corner tucked away among dozens of others? Alternatively, what if scientists concluded it’s virtually impossible for life to exist anywhere other than Earth (given that conditions are so exacting and the likelihood of them being realized is so infinitely remote)? What if they told you that once life had developed here (the only place it could), it was simply a matter of course that a human being would one day appear? If that turns out to be true, the human race once again takes centre stage, despite the fact that our planet revolves around a humble yellow star perched on the periphery of a galaxy that is just one of hundreds of billions of others in the visible universe.