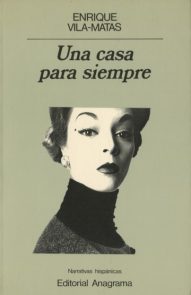 «A new and brilliant reading of the multiplication of voices and lives that makes up each one of us.» Mercedes Monmany, La Vanguardia

(A House For Ever) One Lisbon night, a famous ventriloquist, after having unexpectedly and permanently left the stage, goes to search for the barber who has taken the woman he loves, and in a lonely street near the port, he drives a sharpened Java sunshade through his heart. But readers should not expect to find an explicit confession of the crime in Una casa para siempre, which is a book of the ventriloquist’s memoirs, and nor should they look for the faithful transcript of his escape – a repulsive flight that is dressed up by the narrator as being cultured, beautiful and literary.

But there is no cause for alarm. All books of memoirs hold something or another back. And Una casa para siempre can also be read as a novel in which, if the crucial episodes are hidden, others that are no less important are formed, by means of a piercing and unsteady plot, the peculiar life-path of the narrator. We are looking at the story of a ventriloquist who overcomes the serious problem that is, in his trade, to have a single, unique voice, which then disintegrates into as many voices as the portraits or landscapes that contain his memoirs, and finally ends up rediscovering his own voice in a distant land. And where else than in Arabia Felix – the land of the thousand and one nights. There, now an oral narrator who tries in vain to wave goodbye to writing, he will feel trapped forever in the fictional house that is, at the same time, the scene of the crime, or rather, the place of the word.