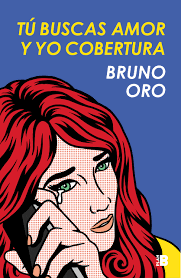 (#You Look for Love, I Look for Reception) Introducing the romantic, tender, somewhat melancholic, and definitely hilarious debut novel by Bruno Oro.

‘I have got barely a year left. I don’t feel like dying though. Not yet. Human life makes for a very entertaining show. As addictive as a soap opera. I’d love to stay just a little bit longer, but i am afraid i have been programmed to disappear. So before the final call, I’d love to pass on a kind of posthumous message, as it were—my owner’s story. No one knows him better than I do. I think it sounds really exciting and entertaining as is, though I’d rather have summed it up as a text message. After all, I am just a cell phone!’

Bruno Oro’s debut novel will appeal to male and female readers alike. In addition to the rowdy humor, this romantic comedy deals with topics such as fame, art, love, sex, friendship, family and some mysterious missed calls. A brilliant debut!