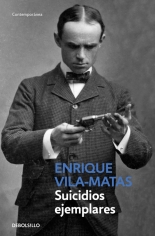 «It is enough to go to the critical articles of Enrique Vila-Matas to see how the originality and intelligence of his writing transcends simple critical commentary to raise it to the position of essay» J.A. Masoliver Ródenas

(Exemplary suicides) In the prologue to this unique collection of imaginary suicides we are told of some mysterious graffiti that appeared some years ago in Fez new town, in Morocco: «It was discovered that they were done by a vagabond, a peasant emigrant who had not been able to adapt to city life and marked out itineraries on his own private map to orientate himself, superimposing them on the topography of the modern city which, to him, was strange and hostile...» Everything points to the fact that in these stories against a strange hostile life, the narrator, like the vagabond in Fez, tried to orientate himself in the maze of suicide by marking out the itinerary of his own secret, literary map: «And that makes me think of Pessoa («Travel, lose countries») and to paraphrase him: «Travel, lose suicides; lose everyone. Travel until all the noble options of death that existed have run out».

Travel and lose countries, invent characters that stop us from falling into the void, go into the open tomb of reality, pursue other lives with great fatigue, die of that extreme passion that could be love, collect storms, interiorise the dead, lose oneself, resign oneself to the greyness of life, fall into melancholy, turn into a ghost: these are some of the noble fortunes of death or ironic farewells to life that occupy the pages of this collection of subtle suicides and they trace out a disconcerting moral path through the subject of death by ones own hand, without succumbing to suicide but without escaping it either.