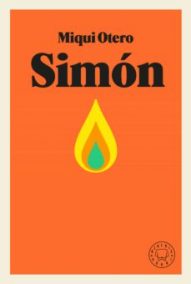 Shortlisted to the Dulce Chacón Prize 2021

«Otero has written a magnificent novel about the marks fiction, literature, and stories leave on our lives. A novel that talks to us about the loss of innocence, somewhere between The Three Musketeers and Balzac’s Lost Illusions.» Que Tal Paris

«The novel can easily become one of those unexpected phenomenon-books. A novel where echoes of Marsé or Casavella resound, also of adventure and intrigue novels with a certain bookish Zaphonian touch.» Xavi Ayén, La Vanguardia

«A novel about lives lived through a literary lens, that in the end always crash into reality and need to rethink and rebuild beyond the romantic and sentimental perspective. Otero’s undeniable commitment to his narrative is harder than it seems, balancing between the friendly and the heartbreaking. The novel’s seductive, pleasant spirit successfully juggles with a political gaze.” Nadal Suau, El Cultural

«If his previous novel, Rayos, was hailed as one of the great stories of his generation and his city, Barcelona, Simón adds magic, history and disenchantment to the portrait. At first it feels like a classic coming-of-age novel, but then it grows, reminding me of Lethem's Fortress of Solitude.» Luis Alemany, El Mundo

«Written with the style distinctive to one of our best storytellers, it´s difficult not to fall in love with the main character. Something rare in today’s fiction can be found in this work: the much vilified tenderness, not to be confused with sentimentalism.» Laura Ferrero, ABC Cultural

«In Simon, the newest (and best) novel by Miqui Otero, we find echoes of all those who have made the writer what he is today: one of the best of his generation. But above all, what we find is an author with a voice of his own, built up through the thousands of pages he has read, who, who knows the story he wants to tell from the very beginning of the book: that of an antihero who ends up saving everyone, himself included.» Inés Martín, ABC Cultural

«Simon moves forward with exquisite attention to the changes the years bring, the mutations in the city and in the young people who are the key actors of a story of losers without decibels and without spasms.» Jordi Gràcia, El País – Babelia

«There’s no doubt that Miqui Otero is the great chronicler of Barcelona at this moment. We follow Simon’s adventures with our heart in our throat, and he becomes one of the antiheroes of our lives. How tender his characters always feel to me!» Lara Hermoso, RNE

«A magnificent novel in all senses of the word.» Ramon Vendrell, El Periódico

«It not only tells the story of its protagonist, it tells the entire history of the nineties from the hangover period after the Olympics down to the present day, marked by the terrorist attack on the Ramblas and the Catalan independence movement. A total novel by one of our most brilliant writers.» Anna María Iglesias, The Objective

«Miqui Otero has written one of the novels of the year. It is a landmark for Catalonia. A true joy.» Antonio Nuño, SER

«His most ambitious, complex, and personal novel.» Carmen López, eldiario.es

«Another turn of the screw in an authentic, contemplative, but not at all complacent literary career, with more maturity and poise, if that’s possible.» Jordi Corominas, Mercurio

«What Simon achieves is a sort of enchanted realism that embellishes the world to make it more bearable. Entering it is like being caught in a spell.» Laura Fernández

«An exceptional novel, one written from the heart, one that spoke directly to me, but that did so because it is a novel that speaks to us all.» Jordi Puntí

«A wonderful novel. And a wonderful hymn to the novel.» Sara Mesa

«A glimmering novel that reminds us that all journeys are interior journeys.» Santiago Lorenzo

«A rich, precise, brilliant book about how we grow, about money, about inequality. An enormous novel that tempts you to inhabit it.» Isaac Rosa

This book is an entire life.

The life of Simón.

Who opens his eyes in a bar, in the middle of two families that don’t talk. Who grows up looking for his cousin, the one who promised him a storybook life and then disappeared. Who learns what friendship is by the side of Estela. Who trots out the recipes he learned at the bar in luxury restaurants. Who pretends to be a hero on yachts and at the pool table. Who has to keep walking forward on journeys that are really just running away. Who falls in love too much, and badly. Who realizes quickly that heroes don’t exist, that fortune has its reasons, that women aren’t trying to be rescued.

Who comes back one day. Comes back to start over again, this time for real, with the novel of his life.

Miqui Otero makes a triumphant return with one of the most moving and authentic novels in recent years. One full of people and places you will return to.