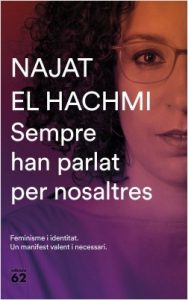 Edicions 62, 2019 | They’ve Always Spoken For Us. Feminism and Identity

“Najat El Hachmi has dared to thread together a series of critical ideas about Islam as a system of masculine domination. Using a true first-person perspective, El Hachmi deals out a combative slap in the face to progressivist benevolence.”Jordi Amat, La Vanguardia

«A concise, brave and powerful essay against Islamic sexism and how it´s accepted, under the name of inclusion, by Western society.» Ara

Few authors have as much authority to speak about feminism and identity as Najat El Hachmi. Far beyond her status as the daughter of a Moroccan Muslim family, her narrative universe is the world of women.

With courage and clarity, El Hachmi highlights the vital importance of achieving gender equality for all cultures and ethnicities and warns of the dangers of placing feminism lower down the agenda than other causes. Her insights are made more profound by focussing on the special cases of women who have migrated to Europe and find themselves trapped in a paradox. They live in modern democratic societies where there is a growing feminist consciousness and where equal rights are a legal reality, yet these “daughters” of Muslim heritage still have difficulty raising their voices in public to speak out against the patriarchal systems they grew up in.

This is a declaration that is both important and necessary: a denunciation of the multiple deceptions and forms of discrimination that women still endure