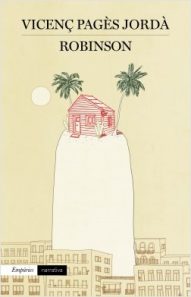 “An intriguing novel in which the emptiness of middle class life slides into complex fantasy but does not come out if it unscathed.” Julià Guillamon, La Vanguardia

“A magnificent novella from Pagès Jordà, peppered with nods to classic literature. In full command of his story; Pagès knows his character inside out and describes him with admirable distance and painstaking detail.” Jordi Llavina, ARA Crítica

“Pagès’ majestic career continues to develop, ploughing his usual furrow, albeit with a twist that speaks volumes of his technical mastery. A painstaking examination of an individual who falls somewhere between Cosimo Piovasco, Calvino’s Baron in the Trees, and the Xavier de Maistre of Voyage around my Room.” J. M. Fonarellas, El Periódico

“One of the books of the year. A powerful small novel which shows Pagès Jordà’s new writing hitting the sweet spot.” Borja Bagunyà, Serra d’Or

“Pagès has created a fable about mankind today with a depth of subversive feeling. […] The author ensures that humour is never far from tragedy, albeit a humour of a pathetic sort that entails pain in its many guises and a great deal of sorrow.” Ponç Puigdevall, El Mundo

“One of the novel’s strengths is the manner in which Pagès makes the reader understand and share in H.’s troubled strangeness. […] The rich, finely-tuned prose and carefully-crafted overall structural complexity go to make Robinson, while disheartening from a human standpoint, a powerful, virtuoso literary display.” Pere Antoni Pons, Ara

“As it unfolds, Robinson constructs a novel that extols the multiple possibilities of literature. Finishing this darkly brilliant book, the reader can only wonder whether the apparent truths acted out by the narrator and main character are really true at all. It doesn’t matter. Robinson employs one magic trick after another; truth is literature – high art.” Lluís Muntada, L’Avenç

“The author has deftly and skilfully sketched a manic, vulnerable and somewhat unhinged character. […] The character strikes a chord with reader from the first page to the last, since Robinson, the comedic nature of certain passages notwithstanding, is ultimately an acerbic metaphor on how to survive in today’s society.” Pilar Romera, L’illa dels llibres

Robinson is a journey of discovery and, at one and the same time, a tale of love and of madness, a reflection on loneliness, communication and imagination, showcasing a Vicenç Pagès Jordà at the height of his literary powers. For a novel as brief, striking and startling as this can only be the work of a writer at the top of his creative game.
When his neighbours head off on holiday, a middle-aged man sneaks in to their house, where he takes up residence in a most peculiar manner.
A bachelor and a postman by trade, he has placed his father in an old folks’ home.
As we accompany him in his exploits as an interloper in the house, the reasons for his extraordinary conduct slowly emerge, leading him into confrontation with his neighbours and the justice system. Not to mention a public defender.