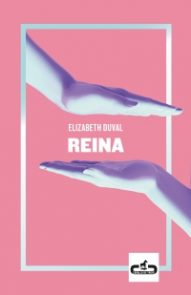 “… It is a novel, it also feels like a diary, and it is always, explicitly, autofiction. In the title lies an aspiration: to reclaim the throne in the face of the law, in the face of those who lay claim to it today (deeply amusing is the Paul B. Preciado chapter, which ends in a draw). The final sections are fantastic: elegant and fiery, they call into question the mechanisms of autofiction. In them, Duval interrogates writing, text, identity, her reading (in a feminine voice, naturally). I keep finding threads to tug on, ideas that seduce me.” Nadal Suau, El Cultural

“One of the most visible figureheads of the trans movement.” El País

«Duval opens her heart with Reina, one of the first diaries of a woman from Generation Z and one of the most anticipated books of the year.» Begoña Alonso, Elle

“This young woman from Madrid has everything it takes to become the newest star in Spanish philosophy… Above all, what is surprising in Duval’s discourse is its maturity and its wide-ranging culture.” Víctor Lenore, Vozpópuli

“Combustible material. Has the weight of a literary and intellectual phenomenon in the Kantian mold. The recent book Exception is like Mark Fisher’s Capitalist Realism recast as poetry.” Ruth Díaz, El Mundo

"A text that reveals the author’s essayistic bent and offers a parody of autofiction from the perspective of a guarded first-person narrator examining her day-to-day life as a philosophy student in Paris.” Anna Maria Iglesia, The Objective

“Duval fills her pages with action on a stage where the quotidian lives alongside the extraordinary, the mundane alongside the philosophical, the real alongside fiction (or autofiction). A novel of surprising force, written in delightfully elegant prose, clear, clean, fresh, with no tricks. Duval calls things by their name and uses the right name for everything, showing a mastery of language that can only be compared to the clarity of her ideas. Her earnest gaze makes her brilliance addictive. Duval is generous and shares not only her memories with readers, but also her world, her ideas, and her worries." Esquire

“Queen presents itself as a novel, with a stunning battery of words, a dazzling deployment of form, a mad attempt to affirm that the word is, in the midst of our century, the weapon of choice for unraveling the great tensions overwhelming the world.” Zenda

The first memoirs in Spain by a woman from Generation Z who at 19 has become a reference point for poetry and activism.

“I believe,” Elizabeth Duval writes, “I was in love with her because she was like a person from a novel, a great stroke of luck, a force without a path or a destiny.”

Though throughout history, the dilemma of writing vs. life has influenced numerous works, the most sensible response has always been there right in front of us, and a reading of this book makes it clear: it is simply literature and life.

A student of Philosophy and Modern Literature, writer and activist Elizabeth Duval (Alcalá de Henares, 2000) has begun a diary that has inevitably transformed her reality, colored by a kind of novelistic conception of existence.

With an exceptional talent for bringing her prose into dialogue with the history of ideas, and in this way offering a gripping method for intellectual stimulation, Reina examines numerous issues that zigzag between the public and private spheres. Its themes include university life as an initiation into maturity, politics in late capitalism, post-adolescent love from a perspective that surpasses out expectations abut the matter, the sublime in reflections on the affects, and desire as a universal but also something radically new.