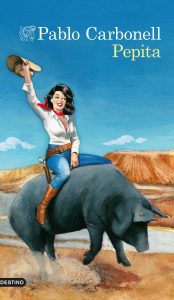 «Pepita, the debut novel by Pablo Carbonell, suggests a journey throughout surrealist humor and human dignity. A story about greed and romanticism in the rural scenario of a village depressed by the shutdown of the mining activity.» Qué Leer

This is a story of greed and romance, set against the rugged back-drop of a town devastated by pit closure.

In the shadows of an old Templar fortress – taking advantage of redundant mine shafts, a spectacular cave, and immense pig fields – a desperate man accompanied by his son (who’s not all there), attempts to engineer a gold rush in order to attract visitors to his guesthouse.

Pepita is infused with surreal humour and a vivid evocation of human dignity. It’s a comedic tour de force with a cast of characters that includes a businessman in the pig industry, a cowboy looking for the secret of life, an avaricious priest, and a man hunting his ancestral fortune. Through them, we discover that the greatest treasure is the love shown by the protagonist, Pepita; a woman whose value is far beyond price.