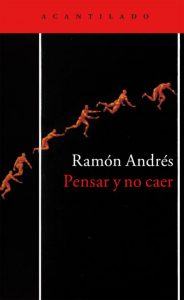 “Against our End-of-Empire backdrop, a figure such as Ramón Andrés is more necessary than ever.” Luis Antonio de Villena, El Mundo

“In a restrained and yet at the same time expansive literary style, Ramón Andrés adds original touches to the nihilistic portrait of this society and these times of ours.” Manuel Barrios Casares, El Cultural

“Over the years, Ramón Andrés has gradually sketched out a lyrical terrain, drawing as soon from Nietzsche as he does from Bach. A trench from which to warn us against logic, against the faith that moves mountains and, what is worse, the gullibility that can cause whole ranges to shift”. Jesús Ruiz Mantilla, El País

“We stand before one of our most profound, thought-provoking and likeable thinkers”. J.A. Masoliver Ródenas, La Vanguardia Cultura/s

“This meditative work is something of an anatomy of human inquisitiveness, treading a perilous tightrope, that daily madness that causes us to stumble unthinkingly”. Francisco Calvo Serraller, El País

“Certain heroic citizens of our country work tirelessly for the sheer love of it and without a thought for what they get in return. Ramón Andrés is one such citizen”. Félix de Azúa, Scherzo

(Thinking while staying upright) In the hands of Ramon Andrés, a poem, a piece of music, a film or a walk become an invitation to reflect and reminisce. With his unique sensibility, his subtle, patient and penetrating gaze, he takes stock of everyday life and offers us a route to thought, revolving around themes such as the importance of breaking bread, the relationship between humankind and the animal kingdom, the illusion of past and present, slander, exclusion, death and nothingness. Thinking while staying upright is an extraordinary take on our society and times.