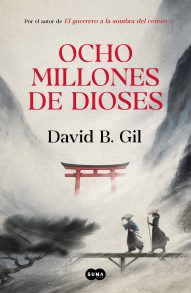 OCHO MILLONES DE DIOSES is THE NAME OF THE ROSE set in 16th century feudal Japan, starring an old Jesuit and a young samurai.

Spain,1579. Father Martín Ayala, a scholar at the renowned Toledo school of translators, receives an unexpected letter from Rome. It has been thirty years since he was last in Japan, but now he must go back to investigate an attack on Christendom in that distant part of the world. Monks are being systematically targeted in a series of cruel, ritualistic murders. Ayala, who learned the language and customs of Japan on the first Jesuit mission, seems the obvious choice to lead the enquiry.

Japan, Year 7 of the Tenshō era. Kudō Kenjirō, son of a rural Samurai from Anotsu, is given an unenviable task. He is to accompany the foreigner who has come to investigate a number of mysterious crimes. Kenjirō soon discovers the job is not as straightforward as it first appeared; dark forces conspire to hamper the visitor’s endeavours. Keeping the Jesuit priest alive becomes a duty that not only threatens Kenjirō’s honour, but the survival of his family. Any failure on his part would have devastating consequences for them all.

Hailing from very different worlds but thrown together by fate, Ayala and Kenjirō must travel through a country torn apart by war and conspiracy. Their mission is fundamental not only to the survival of Christianity in Japan, but the very future of the country.