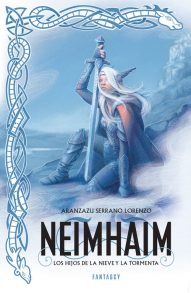 «A tour de force. An ambitious epic novel that is original, believable and complex and shows that good fantasy doesn’t have to come from the English-speaking world. A real pleasure to read; it’s like watching a film on the big screen.» Elia Barceló

«It has the feminine energy and potency of The Hunger Games, the magic and the addictive qualities of Harry Potter, it is a paean to gender equality.» El Acróbata Magazine

(Neimhaim. The Children of Snow and Storm) In a distant land lashed by a storm, a boy and girl are born after an unusual gestation that lasted twelve months. They belong to opposing clans, brought together by necessity. They were conceived to rule the young kingdom of Neimhaim as husband and wife, but their arrival is also prophetic: they are the Awaited, who will bring back a lost tribe, the Ancients.

She is called Ailsa, and belongs to the Kranyal clan, a warrior people who love the arts of combat. He is Saghan, a member of the Djendel clan, peaceful protectors endowed with supernatural gifts whose use is governed by a strict moral code. It all seems to point to a prosperous future, but three years after they are born something unexpected changes the lives of the Heirs.

Banished to a savage land, a special bond inevitably grows between Ailsa and Saghan. This bond is also their greatest weakness. Meanwhile, very far from there, someone is closely following the lives of the Awaited: Nordkinn, an evil god in exile, patiently plots to turn Ailsa and Saghan into the instruments of hiw revenge against the other gods.