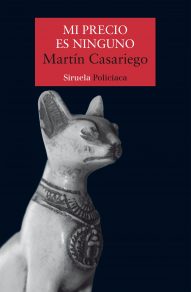 «Shockingly agile and brilliant dialogues, and subjects perfectly chosen, like a soundtrack to set each scene.» Pilar Castro, ABC

«The great epic themes are present in I Don’t Have a Price, seen from an ironic (when not openly comical) perspective. That profoundly modern attitude hides a moral evaluation of society.» Juan Ángel Juristo, El Mundo

«From the time of his first book, Martín Casariego’s narrative work has received acclaim and prizes from the critics, who have always treasured his novels’ capacity to dig deep into emotions and intimate conflicts.» Ana Rodríguez Fischer, El País

«The final result is one of those novels that you devour, that have the captivating magic of a demystified, simple, and fluid prose that plays with the cliches of genre and updates them with peculiar ability.» Jordi Cervera, Nuevo Diario

It’s 1996. For years, Max Lomas has seemed to live for decadence and decadence alone. He likes to kill time at The Blue Cat, a dive bar in Madrid. But he hasn’t lost his hopes of settling accounts with his past. And, like the dawn of a new life, his past comes back to him one night when the woman he wanted to forget, but whom he remembers every detail of, reappears in his life: Elsa, his great love and the cause of his ruin six years ago; Elsa, who needs help now to save her sister from the clutches of García, her ex-boyfriend in the Basque Country. While he’s trying to decide if he can trust her again or not, and with the excuse of three vanished kilos of cocaine, Max realizes the time for revenge has come… After I Smoke to Forget That You Drink, we have the second installment in a series that is already a reference point in the crime writing panorama in Spain. An ironic, savage story that draws on sharp humor in a singular homage to the mainstays of the genre: loyalty, love, betrayal, and death, following in the footsteps of its most accomplished practitioners, like Dashiell Hammett, Raymond Chandler, and Ross Macdonald.