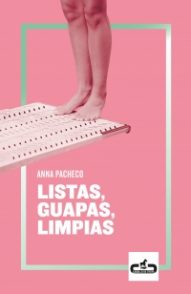 “With a fresh style (…) with a great intuition to dissect even the smallest of the details, Anna Pacheco draws a grim , acid and lucid portrait of the middle class.” Laura Ferrero, ABC Cultural

A student goes back to spend the summer with her sick grandmother in the poor neighbourhood where she grew up. Everything that happens during that long August will change her forever.

Summer is just beginning and the protagonist of Clever, Pretty, Clean wants to leave her boyfriend, but something is holding her back. She is equally indecisive when she arrives at a party full of strangers and is asked to choose the next record, or when she’s out shopping with her mother and has to pick a brand of frozen pizza for dinner. Even when she is talking to her childhood friend, Yaiza, she’s unable to open up about her plans for the future. This feeling of emotional paralysis is nothing other than her conscience kicking in over every one of the decisions, big or small, that she must make now that she’s an adult woman in the eyes of the world.

Clever, Pretty, Clean is journalist Anna Pacheco’s first foray into fiction. Written in the first person, this is a biting, intimate account of a woman in constant conflict with her political ideas and the social construction of her class and gender. The novel is full of references to the pop culture of the 90s and 2000s, the exploration of female sexuality and a veritable torrent of ideas brimming with black humour.