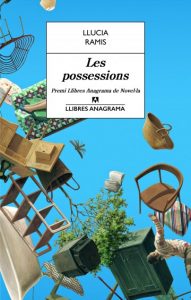 “A portrait of the author’s generation. The narrator could be the author herself, giving the story an honesty rarely seen in this kind of novels.” Inés Martín Rodrigo, The critic reccomends - ABC Cultural

“A lively and intelligent narrative style full of acute sensitivity and evocative power. Ramis is brilliant in so many ways; her use of language, the faint whiff of well-read Houllebecq, and especially the way she builds scenes, leaping seamlessly from one set piece to the next. A brilliant, lucid study of decadence, fear, death and forgetting.” Carlos Zanón, El País

“Ramis has created a tale told across two time periods, dealing with ethics and money, guilt and the need to atone for one’s sins; a tale of parents and their children. An intriguing read, filled with shades of grey, a skilfully crafted evocation of the paradise lost of childhood, alongside a highly appealing, convincing reconstruction of the world of the 80s and 90s. […] The author thinks long and hard on the values we once held and those we hold now. […] A novel that, while very much of the here and now, also has something of an ancient myth.” Julià Guillamon, La Vanguardia

«Three words: memory, oblivion and ghosts articulate the argument and the structure of this precious and courageous book (...) Ramis is a true delight, her intense and personal literary style is worth celebrating. (...) She writes to discuss about things one never talks about, guilt and the pain of memory. She braids past and present with immersive skill to tell the story of what we are and what we lost. It´s such a pleasure to enjoy her writing." Pilar Castro, El Mundo

“An ambitious novel, it covers a lot of topics. Ramis, being a good journalist, has a special talent to find and deal with the issues that matter and define us.” Aloma Rodríguez, Letras Libres

“A journey into the depths of past suffering. A thriller constructed upon old wounds that overlap like the layers of an onion. The main character peels them while realising what it means to grow.” El Mundo

“One of the most interesting voices of the recent Spanish narrative.” Álvaro Colomer, El Mundo

“Full of brilliant moments and extraordinary characters. With supreme sensitivity and subtlety, Ramis pens an ode to disappearing worlds and writes of the challenges of letting things go – be they houses, people or the past.” Laura Ferrero, ABC Cultural

“Llucia Ramis combines social commentary and family saga (…) A pocketful of set-pieces, the pieces of a jigsaw puzzle that only slot together at the end. At times the action seems to hurtle towards a fast-approaching conclusion. At other moments, it slows right down to dwell on the detail.” Laura Fernández, El País

«Les possessions goes down the brave and risky path of rummaging through the family tree, unearthing complicated truths with honesty and without fear.» Eva Piquer, Ara

“Ramis blazes the most fertile of trails through contemporary autobiography. An elegy to family mingles with classic morality tale and the two coalesce in a thriller that bursts into the main character’s present-day life. Although the novel is about fear and personal and social upheaval, the reader emerges in high spirits because the author writes skillfully without ever descending into sentimentality.” Ponç Puigdevall, El País

“A denouement to take the breath away that caps off a richly-plotted story, brim-full of memorable turns of phrase and thought-provoking observations written in mouth-watering prose. It’s been quite some time since I last saw an author combining a lightness of touch and a sweeping vision with such deftness, creating a powerful work with a depth of feeling that lingers long after the last page has been turned.” Imma Monsó.

“A fantastic novel... I read it with delight... a work that does full justice to Llucia Ramis’ always promising talent and in which, for the first time, she makes full use of all of the narrative tools at her disposal and shrugs off the generational tag, albeit without turning her back on it.” Sergi Pàmies.

This is a ghost story. A novel that starts with a return and ends with a howl. The narrator of The Possessions travels from Barcelona to Palma to put a stop to the paranoid conspiratorial ravings of her father, a man who, following his retirement, has gone from an easy-going high-school teacher to a man hell-bent on fighting a legal battle against an alleged zoning crime.

It proves to be an awkward weekend of conversations with a father who has suddenly become a stranger, a mother acting as if she hadn’t a care in the world and a former lover and mentor. These encounters reopen old wounds, pitching the protagonist into the very heart of her family’s past history, marked by a sinister event in Madrid in 1993: caught up in various financial shenanigans and staring ruin in the face, the entrepreneur Benito Vasconcelos (a former business partner of her grandfather) murders his wife and son, before taking his own life.

Falling somewhere between an elegy, reportage and a thriller, Llucia Ramis has written a novel of many layers, deftly interwoven with a lightness of touch and a depth of feeling at one and the same time. A deeply personal, bold exploration of the past history of a family and a country, of the nature of romantic love and failed relationships, of ambition and thwarted plans, of how we build our own identities and hold firm to objects and feelings, aware that nothing lasts forever. Not even the homes in which we were once happy, for growing up means having nowhere to return to.