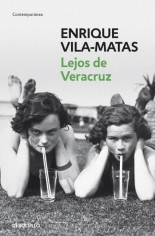 «A metanovel, possibly the best published in this country in recent years...And with excellent results. Read it and pass it on.» Rafael Conte, Abc

«With this latest work, Vila-Matas has reached such a notable maturity and made such obvious progress that it might be difficult to perceive in the rest of our contemporary writers. A shining novel without a doubt.» Santos Alonso, Reseña

«He digs like never before into his experience to set out, under the exaggerated moon of Veracruz, on his personal journey to the end of the night.» Ignacio Echevarría, El País

(A Long Way from Veracruz) What is left for us when we are already far from Veracruz, far from the volcano of last year’s passion, and, in short, already far away from life? For the youngest of the three Tenorio brothers, the narrator of this original and fascinating novel, all that is left is literature as a last refuge, as he is in a situation where almost the only thing he can do is write. Destroyed in life, this young layabout of 27 feels very old and tired, and on seeing that he has nothing better to do and nowhere better to drop down dead, at the end of the world, he sets about remembering and writing the story of his hatred for his family home, and also his failed attempts to be loved in different countries, which are distant from the monotony of repetitive days.

A battered hero of the novel of his own life, the last Tenorio writes, between the daily experience of his unrest and the memory of his descent to hell, a novel that wisely embraces both the figure of the unlucky modern guy and the rumour of an underlying essence that behind so much refuge and literature in the port of Veracruz: that tragic secret, already a tradition, which those who taste great and all embracing novels always end up discovering.

In the novel Lejos de Veracruz, Vila-Matas proceeds along the original path of his most recent narrative. In Una casa para siempre (1988) is a novelesque structure that is fragmented thematically. In Suicidios ejemplares (1991), on the other hand, a single theme – suicide – is fragmented structurally. In Hijos sin hijos (1993) we find a book of stories that is at the same time a novel. And now we have Lejos de Veracruz which, above all else, is a novel.