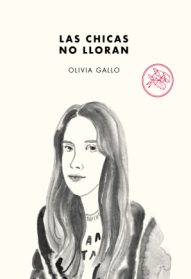 «A new storyteller has been born: in these minimalistic tales, Olivia Gallo offers a portrait gallery of adolescents moving into young adulthood today. Stories in the first person, inhabited by fragile or disoriented presences in a world without references, where the first thing you feel is fear and then, as if reflexively, a weakening of tension reflected in the writing itself.» Daniel Gigena, Página 12

“A marathon with stages as slippery as they are dangerous: childhood, adolescence, youth. Olivia constructs poetic images that hypnotize with their elusiveness. Images you can touch and smell.” Victoria Pérez Zabala, La Nación

After a family cookout, at the leaden siesta hour, a girl and her boyfriend run off to go to a sleazy motel. After sex, they look at the mirror on the ceiling over the bed and see themselves as an old married couple. A listlessness affects them, the same one that arises passing through a photo album on Facebook. He tells her how his father used to beat him; first like this, then like that, then again the same as before, a mimicry of violence like the mimicry of sex, an ancient, vital choreography that the narrator seems to know from before, irrespective of her youth––from another life, another time, one that will never darken over for her.

In the brave, melancholic vein of Milena Busquets, with the sensual abandon of Miranda July, these stories dissect the brutality and fear of love and the violence of its contradiction: dark passageways, like those of a ghost train filled with mothers, fathers, children.

A wise, uncompromising, and compassionate young woman, sharp and delicate, Olivia Gallo tells what happened yesterday, but from a distance. She pushes the past away, twists it, pulls it, savors it like a bitter candy, lets it move or irritate her, but not to cry. Never to cry.