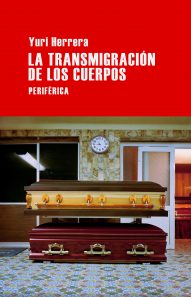 *Winner of the English Pen Award

«In Herrera's slim, amusing book, [he] strips Romeo & Juliet to its essence and sets it against a plague that symbolises Mexico’s recent violent history.» Publishers Weekly

«In his new novel Herrera pivots from border fabulist to noirish raconteur, bringing his considerable allegorical powers to bear on another facet of contemporary Mexican culture: Namely, its legacy of violence. Herrera's prose, deftly translated by Lisa Dillman, is lean and hard-boiled — and often caustically poetic — though underpinned by a sort of wry self-awareness.» Dustin Illingworth, L.A. Times

«A highpoint in the genre of the novel.» Álvaro Enrigue

«A magnificent book and its author one of the few indispensable Latin American writers of our times.» Patricio Pron

(The Transmigration of Bodies) This is the story of an individual that has to take to the streets at a time when everything is telling him to stay locked inside. An epidemic, love and death, sex and fear, paternity and future. An atopia. The Alfaqueque and the Tres Veces Rubia (The Thrice Blonde), the key characters among a fascinating group. Yuri Herrera’s third novel is a phenomenon of magic and masterfulness, and it is also a text that outruns all convention: a novel of the times and a novel of future times. A novel about what’s fundamental in life and about the things that make us human and, sometimes, also negate our humanity. Fear and death. And in a certain manner, reincarnation: the transmigration not of souls, but of bodies. Rarely has contemporary literature produced such a timeless book. A masterpiece.