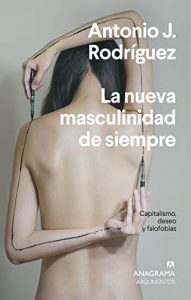 The most recent period of viral feminism or debates around gender, inequality and consent have produced a series of mutations in the ways masculinity and its models are felt and experienced. On the one hand, we see reactionary responses violently counterattacking any interrogation of masculine privilege, but there is also an awakening of an apparently new disposition asserting its commitment to feminist claims while, paradoxically, assure men of their survival and dominance in this new world.

At the same time, the production of multiple accounts of gender and increasingly frequent dialogues between masculine and feminine subjectivities unleashes a questioning of the bases of our desires: What are we talking about when we talk about heterosexuality? Does doing so even make sense? How do we construct our language concerning love, and in what way does this thwart or condition our way of relating to others?

Using an array of registers from essay to journalism to memoir, Rodríguez takes multiple paths to explore the ways masculine experience is trying to respond to the challenges it faces our time. Crossing through territories such as politics, sports, culture, fashion, and the economy, this work looks for explanations and alternatives to the traits that model masculine subjectivity, among them the state of permanent war and the colonization of women’s bodies.