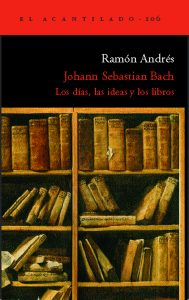 “Ramón Andrés has offered up one of the most remarkable pieces of research on Bach in recent years.” Jordi Llovet, El País

“Ramón Andrés’ Johann Sebastian Bach is a book among books, in which all of Western knowledge is to be found. One sometimes gets the feeling that Bach’s music is this book.” Stefano Russomanno, ABC

“A superb book on Bach, unprecedented in this country, highly readable and scholarly, and very well written to boot.” Carles Barba, La Vanguardia

“A densely-packed essay filled with point and counterpoint, written in a finely-honed prose style that calls to mind the author’s work as a poet, laying out a magnificent map of the German musician’s world, reflecting on the knowledge to which he was privy, from alchemy to theology.” Joan Anton Cararach, El Periódico

(Johann Sebastian Bach: his days, ideas and books) Johann Sebastian Bach left behind him a library of a little over eighty books, housing works on theology and spirituality (or so the inventory taken on his death would have us believe), and which, alongside other texts, constituted, one might imagine, a place of everyday intimacy and reflection. A contemporary of Newton and Leibniz, his music emerged at a crucial point in the Western imagination, as borne out by his unparalleled ability to take on board the themes arising from the Age of Reason and spirituality, transforming them into art with an intellectual and human insight the like of which had never been seen before. Who was the reader of those works, what was his position in Leipzig (the city that would be his final resting place), what role did the musicians of that time play, with whom did he rub shoulders, why did he take certain decisions, how did the presence of death come to bear on his character, how did he approach the notions of time and eternity, what worries of a financial nature ailed him? These, among others, are the questions posed in this book. A fascinating insight, in the company of Ramón Andrés, a scholar, reader and devotee of music, into the universe of one of the cornerstones of Western culture.