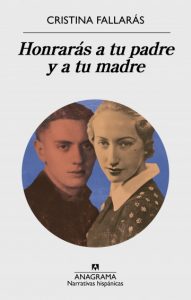 Anagrama, 2018 | Honour Thy Father and Thy Mother

«Thrilling. Fallarás exhumes the dead spared by the Franco regime as if responding to a collective catharsis.» Matías Néspolo, El Mundo

“Midway between reportage and a novel, Fallarás uses her writing to join the march against silence. A march demanded by much of Spanish society, which this novel dares to remind that families are complicit in the silence. […] Fallarás tackles her subject as a writer at the height of her powers.” Enrique de Hériz, El Periódico

“This is a dark tale of an extraordinary family saga. Fallarás writes with rage, conjuring up images that cut like a knife, to offer an exercise in catharsis that captivates the reader utterly.” Gabi Bobé, Qué Leer

“There is something of a rowdy social happening about Fallarás: it’s as if she lived to turn the world inside out with her verve and eloquence, or to take rebellious, heterodox pot-shots.” Antón Castro, Heraldo de Aragón

“A writer who has ‘set out’ in search of her dead in Honour Thy Father and Thy Mother, a novel which, as well as digging deep into her family’s past, also explores the intimate silence shared by thousands. A silence filled with open wounds, buried secrets and a combination of tenderness and atrocity.” David Morán, ABC

“Reconstructed with an unflinching, analytical and critical gaze, this family history has moments of excellence. The author has a keen eye for detail and the result is a feisty political novel, an account of the burden of the Franco regime extending far beyond the post-war years, showing how the victors have besmirched whole lives and the entire history of our country.” Antonio Fontana, El Cultural

«Fallarás digs deep into her family’s past in her latest novel Honour Thy Father and Thy Mother, an unclassifiable work in which she has sought to “lift the silence” that shrouds her own history, such as her paternal grandfather’s death at the hands of a firing squad before a cemetery wall in 1936.” ElDiario.es

«The author offers a novel that breaks with the topics and, through small stories, completes a  portrait of our social and political evolution.» Èlia Morgou, Ara

(Honour Thy Father and Thy Mother) “My name is Cristina and I have set off in search of my forefathers. On foot. I seek the dead so as not to have to kill myself. To live? I’m not sure. To summon them, to speak with the dead.”

The protagonist of this book, who not by chance bears the same name as the author, sets out on a physical and emotional journey in search of the secrets of her family’s past and her own identity. Cristina’s search will lead her to unearth the stories of several generations, to discover disappearances, escapes and deaths, wounds that never healed. One of the heavier silences shrouding her past concerns certain events during the Spanish Civil War: a firing squad in Zaragoza, a man who died in another man’s place, a Mexican sublieutenant who witnessed that barbaric act, two people from opposing sides who came together in the post-war years… But as she probes the family secrets, she is led much further astray and to other times, to the twenties, the war in Africa, Mexico, women trouble, children raised in a boarding school…

This fascinating book, a one-of-a-kind, falls midway between fiction and non-fiction, in which fiction helps shed light, lifting the lid on the shadowy regions the protagonist cannot access with her investigations, the written documents she comes across and the eyewitness accounts she hears.

Fallarás offers a narrative that goes far beyond the hackneyed Civil War clichés and which, drawing on small stories, depicts the political and sociological evolution of a country. This is a novel that houses many novels, a family saga concerning real events that appear worthy of fiction and an investigation in which fiction helps shed light on reality. A work that speaks of betrayal, disillusionment and violence, but also of decency, resistance and hope.