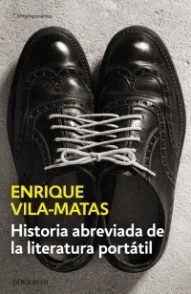 «A work of compulsory reading for anyone interested in the evolution of the Spanish novel.» Miguel García-Posada, Abc

«Since his Historia abreviada…, shandy Vila-Matas has enjoyed the fervour of the Mexican readers.» Christopher Domínguez Michael, Vuelta

(A Brief History of Portable Literature). You have in your hands the most emblematic, almost legendary, work by Enrique Vila-Matas. Published in 1985, Historia abreviada de la literatura portátil was immediately translated into a large number of languages and, beyond the pages of the book, caused various conspiracies in real life.

The Shandy conspiracy, or secret society of portables, was founded in 1924 at the mouth of the River Niger and dissolved three years later after an outrageous scandal in Seville. Among those who formed part of the Shandy conjecture were Duchamp, Scott Fitzgerald, Walter Benjamin, César Vallejo, Rita Malú, Valery Larbaud, García Lorca, Pola Negri, Berta Bocado, Alberto Savinio and Georgia O’Keefe. There were two essential requirements for joining the secret society: one was that the person’s artistic works should be portable, that is, they should not be heavy to carry and should be easy to transport in a suitcase; and the other condition was that they should function as perfect single machines: extreme sex, innovative spirit, an absence of grand plans, insolence, tense coexistence with the double, sympathy towards blackness and tireless nomadism.