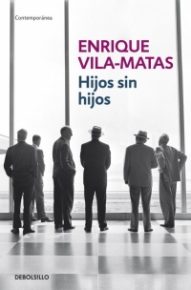 «A complete masterpiece. A masterpiece that makes him an irreplaceable author.» Ignacio Echevarría, El País

«An ambitious book like few others in recent years.» Mercedes Monmany, Diario 16

(Children without Children) In this original and heterodox Brief History of Spain of the last 41 years – the age of Kafka when he died in Kierling – the main characters of the different national episodes are all children without children, people who do not want any descendents, beings whose very nature removes them from society and who, contrary to what one might think, do not need any help, for if they truly want to remain alone they can only feed off themselves; people who have invented a kind of distant indifference that allows them not to be tied to reality but by an invisible thread like that of the spider, and where everything seems to fit in with what Kafka wrote in his Diary in August 1914: “Today Germany has declared war on Russia. In the afternoon I went swimming” In other words, everyone places historical and personal planes on the same level. For that reason, Hijos sin hijos is not only an audacious and surprising run through our latest and recent history, but it is also an anthology of ambulant ghosts, Czech shadows, poor people and other swimming stars.