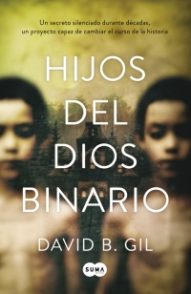 A great mix of noir novel, science fiction and investigation. One of the essentials of the year.» Antonio Torrubia, El Periódico

«Once you start reading, you can not escape. An exciting experience.» Público

«A visionary and hectic thriller. David B. Gil has written one of this year’s essential titles.» Juan Gómez-Jurado, author of El Cliente and Espía de Dios

«David B. Gil knows exactly what he is doing. He writes wonderfully. This is a stellar debut.» Cesar Pérez Gellida, author of the bestseller series Dies Irae

(Children of the Binary God) On the second half of the XXI century, the books are no longer printed and money is only stored on servers. The world becomes intangible and the power elite, nostalgic for a past that didn’t live, compete to obtain any icon that ever belonged to the pre-digital era. Daniel Adelbert, a “prospector” specialized in retrieving twentieth century pieces, is hired by the collector Kenzo Inamura in order to find not an object, but a person: a man that moved among the shadows of the past century in a way that decisively influenced what was yet to come.

On the other side of the world, the journalist Alicia Lagos receives a message from an old friend who wants to bequeath his unfinished investigation, the very same that took him to the grave in his eagerness to discover what lied behind the walls of St. Martha Irish orphanage.

Both investigations lead to the same question: what is the Zeitgeist Project? The answer lies under the rocks of the White City of Tel Aviv and over the floating suburbs of Singapore, blended with the murmur of the Data Network. To answer it means to unravel a secret that connects the key events of the past with the outcome of the new era.