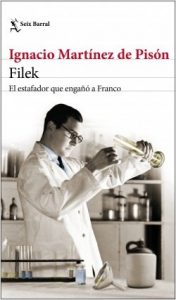 “Although Martinez de Pison has been gathering information like a true historian, one can´t deny that this true yet crazy adventure has the power of great fiction. The reader will be fascinated by this passionate series of picturesque scams and prison tours.” J.A. Masoliver Ródenas, La Vanguardia

"Told by Pisón, this chronicle of the con man who fooled Franco is a wonderful story as changing as the reality and the history in which the events took place." Ana Rodríguez Fischer, El País

"With deftly-paced scene-setting, Martínez de Pisón paints a suggestive portrait of an all too real modern-day con artist. What makes this a novel is the appeal held by a life that is truly novelistic. The author fashions an entertaining tale with a moral purpose at its heart." Santos Sanz Villanueva, El Mundo

“It is precisely because spurious investigation and the rhetoric of auto-fiction abound when dealing with topics like The Civil War, The Second Spanish Republic, and the immediate post-war period, that opting for the truth makes Martínez de Pisón one of our best novelists.” José María Pozuelo Yvancos, ABC Cultural

“This is the account of an investigation which draws together documentary research, journalistic storytelling, historical reconstruction and ethical reasoning. It paints a vivid picture of tumultuous times. With peerless narrative pace and tremendous testimonial presence, we are offered a veritable meditation on historical falsehood and the unreliability of reality.” Jesús Ferrer, La Razón

“With absorbing literary skill, the author recreates a true story, as original as unknown, while relaying a faithful portrait of the Spanish society in the 30s and 40s.” Forbes

“Mind-blowing and at the same time graceful. A book to be devoured hungrily and, at one and the same time, one with the profundity of a treatise. (…) Filek’s greatness lies in making us care about something that no one cared about, until Pisón came along. The ability to take in the entire picture from one corner is proof of talent, but also a way of observing and of being that makes Pisón an essential writer. His readers are lucky indeed. As is Filek, who could never have imagined as dignified and moving a posthumous portrait as the one painted by this author.” Sergio Del Molino, Eñe

“Pisón has an extraordinary way of getting under the skin of his characters, somewhere between detective and historian.” Culturas La Vanguardia

“The plot and characterisation couldn’t be more worthy of fiction or more obviously the fruit of a first-class writer’s boundless literary imagination. This is an original mixture of genres that straddles narrative, essay and journalism. The trend for the non-fiction novel finds one of its most brilliant exponents in Emmanuel Carrère.” Miguel Ángel Villena, ElDiario.es

“The book can and should be read as much more than a mere biographical sketch, as this insignificant character offers an insight into the ins and outs of the beginnings of Spain’s contemporary history, from the Civil War to the first, ruthless years of the dictatorship.” Jordi Corominas, El Confidencial

“Seemingly a protagonist worthy of a 20th century picaresque tale, Filek is in fact as real as they come. Martínez de Pisón offers a comic, suspense-filled depiction of the Franco regime thanks to the con man who fooled Franco.” El Mundo

“This neo-picaresque tale will cause many a reader to crack a smile, though, when you stop to think about it, it remains the absurd drama of a loser with too many echoes in the present day for comfort.” Daniel Heredia, Zenda

The real story of thge swindler who deceived Franco with a formula capable of turning water into fuel.

The famine-ravaged Spain of 1939 was on the verge of becoming the world’s petroleum powerhouse. An Austrian chemist named Albert von Filek, inventor of
a synthetic fuel combining vegetable extracts with water from the Jarama River, had placed his secret formula at the service of Spain’s future glory, having turned down eye-watering bids from major companies. Protected and worshipped by the Franco regime, Filek basked in the admiration of the country’s top echelons, until a simple chemical analysis called his bluff and he was put behind bars.

Witness to some of 20th century Europe’s most turbulent episodes, Filek is the star of a perfectly documented true story, with generous helpings of comedy and suspense, and a magnificent portrait of Spain in the thirties and forties.

Filek turned up in Madrid in 1931. While already trailing a lengthy criminal record behind him, he still amounted to little more than a small-time crook. Ignacio Martínezde Pisón’s novel tracks him down through the records and newspaper archives of half a dozen countries, before focusing on his time in Spain, when a twist of fate briefly turned this old-school swindler, a born survivor blessed with prodigious powers of persuasion, though short on scruples, into a major player.

Beginning in late 19th century imperial Austria, his exploits will come to an end when he is handed over as an alleged Nazi to the Allied powers in Germany at the end of the Second World War.