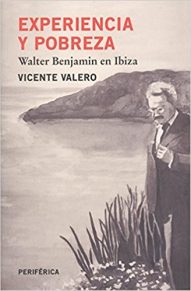 "With admirable restraint and understanding, Valero paints a portrait of overpowering melancholy. He feels no need to hog the limelight in order to be fully present in everything he writes. His writing is steeped in a knowledge of Ibiza and of the life and work of Benjamin. […] The author has made Benjamin’s novel his own without the need to invent a single thing.” Antonio Muñoz Molina, El País

“Vicente Valero has written book as perceptive as it is stimulating, in which Benjamin is portrayed as a man with an exceptional outlook on life, marked by shifting moods and suffering brought about by illness. In a well-honed, crystal clear, elegant prose style (calling to mind the writer’s style during his time on the island), Valero has not recounted a minor episode from Benjamin’s life, but rather has written an entire cosmogony of the writer’s universe.” Diego Doncel, El Cultural

“A though-provoking essay that manages to transport the reader back to a small corner of reality that is essential if we are to understand the way Benjamin’s work evolved. […] An excellent essay.” David Hernández – de la Fuente, La Razón

“An eye-opening essay that recounts those crucial years in which Benjamin sought refuge from Nazism on Ibiza and sketched out his future work.” Matías Néspolo, El Mundo

“Falling somewhere between narrative fiction, reportage and an essay, this book invites the reader on a fascinating journey through some of 20th century European culture’s most out of the way spots. In an elegant, precise prose style, Valero recovers correspondence, notes and eyewitness accounts to redraw the map of those crucial years in the life of Benjamin, inextricably linked to the Balearic island. […] There is room for everything, tradition and modernity alike, in the writing of Valero, who writes at all times from an island-based universality.” Begoña Méndez, El Mundo

(EXPERIENCE AND POVERTY. Walter Benjamin in Ibiza) Two decisive years in the life of Walter Benjamin, 1932 and 1933, were particularly, and one might even say somewhat surprisingly, bound up with the island of Ibiza. Over the course of those two years, the Berlin-born writer’s life and literary career were profoundly affected by a personal crisis. Financial hardship and poor professional prospects were soon joined by a crisis of another sort, the one in his home country, with an economy on its last legs and the rise of Nazism to power. Like many others, Benjamin found himself with no choice but to leave Germany, in his case never to return. Although his time in Ibiza saw Benjamin pen some of his most insightful writings, jotting down observations and situations that would later take centre stage in his work, this episode is generally given short shrift. This book seeks principally to delve into the reasons that took him to Ibiza and offer an account of his days on the island.

FIVE KEYS TO THE BOOK

1.- Popular Mediterranean architecture. Walter Benjamin’s arrival in Ibiza in 1932 coincided with the “discovery” of rural Ibizan housing by the young GATCPAC architects (Association of Catalan Architects and Technicians for the Progress of Contemporary Architecture), under the auspices of Josep Lluís Sert (who also visited the island in 1932). This secular approach to construction had a major influence on the group’s own projects and was unveiled to the world at the 9th International Modern Architecture Congress staged in Athens in 1933, leading Le Corbusier to announce “an extraordinarily interesting Mediterranean awakening” in search of the common roots of modern architecture. Benjamin lived in one such rural dwelling during his first stay on the island, using it as a springboard for his observations on architecture in general.

2.- The storyteller. In Ibiza, Walter Benjamin thought long and hard on “the art of storytelling”, penning a few short pieces on the subject that would later go on to inspire his widely acclaimed essay “The Storyteller”. Not only that, he himself became a storyteller. He wrote seven short stories, all set on the island, as well as the lion’s share of his autobiographical novel Berlin Chronicle and several chapters of Berlin Childhood Circa 1900. It could therefore be said that literature took precedence over philosophy during his time in Ibiza. Among the many other brief pieces on a variety of subjects that are analysed in this book, his island period also saw him write literary reviews for the German media, as well as his essays The Present Social Situation of the French Writer, Experience and Poverty and On the Mimetic Faculty.

3.- The Nazi “Secretary”. In the summer of 1933, the first Nazi visitors arrived in Ibiza (on holiday), alongside Jews fleeing Germany in search of a place in which to settle. Benjamin struck up a friendship with a young man named Max Versphol, who a few short months later (in the autumn of 1933) would lead the SS Hamburg Division. Benjamin got to know the ideas of this young man, who, in the writer’s own words, performed “secretarial” tasks for him in Ibiza (mainly copying manuscripts, and occasionally safeguarding them at the philosopher’s request), and yet they continued to correspond at least until 1934, since it is known that Versphol helped him out financially on the island. But Versphol was not the only Nazi with whom Benjamin had dealings in Ibiza: on his arrival in 1932, he met Jokisch, a peculiar character who went on to become the protagonist of one of his Ibizan stories: “The Cactus Hedge”.

4.- Blaupot, his last love. In the summer of 1933 Benjamin met Anna Maria Blaupot Ten Cate, a Dutch painter with whom he fell in love, sharing his last days on the island with her.

5.- A fashionable island. Ibiza made a name for itself at that time, becoming a fashionable spot. Between 1933 and 1936, the island welcomed artists and writers such as Raoul Hausmann, Pierre Drieu La Rochelle, Gisèle Freund, Florence Henri (with whom Benjamin coincided), Albert Camus, Rafael Alberti, María Teresa León, Jacques Prévert, Esteban Vicente, Wols, Soledad Martínez… The book is also an account of that heady time, when ancient and modern coexisted side by side. Among the more bizarre examples was the visit to the island paid by General Francisco Franco, newly appointed General Commander of the Balearic Islands. On 6 May 1933, the General’s retinue passed in front of the philosopher’s house.