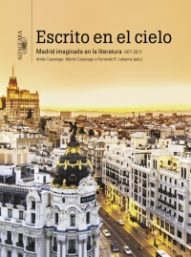 “It paints a lively portrait of the capital with a series of snapshots that light up an event, a city intersection, a human occurrence, a feeling, a meteorological phenomenon, a popular festivity…” Santos Sanz Villanueva, El Cultural

(Written on the Sky) All of a sudden, it strikes you that your city has turned into a fictional character. Over time, a fair few cities have entered that mythical world, one written without much thought for History and which sets down on paper both the passage of time and the city’s geography and the customs and habits of its inhabitants. Madrid is one such city. Cosmopolitan and modern, a gateway to Latin America, it is a living, breathing entity in perpetual motion. The city where no one is out of place, yet everyone becomes anonymous and invisible, a place in which to hide and a place in which to shine.
The city’s transformation into a character from contemporary fiction, at the hands of many of Spain and Latin America’s foremost writers, makes for a thrilling story that had yet to be told.
Written on the Sky does so in the form of over one hundred and fifty fragments by another hundred and fifty or so authors, extracts from stories and novels published between 1977 and 2017, over the forty years of Spain’s democracy.
The finest tribute literature could pay to a city.