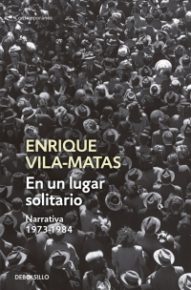 «Vila-Matas is one of the best writers in the world.» Andrea Bajani, La Repubblica

Bringing together the author’s first five books, En un lugar solitario includes a formidable previously unpublished and highly extensive prologue by Vila-Matas himself, in which he reviews the surprising details of his initiation into the world of literature.

Vila-Matas’s formative years were itinerant ones, and saw him working as a theatre critic and film actor, appearing in James Bond films, living in Zembla and renting an apartment from Marguerite Duras. It was during these years that he wrote his first works, forays into short fiction in which the major themes of his literary output can already be perceived: identity, disappearance, smoke and mirrors, and the connection between fiction and reality.