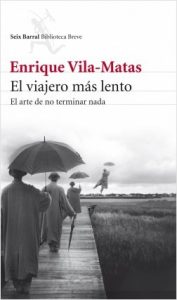 (The slowest traveller. The art of finishing nothing) A new edition of one of the most representative volumes of Enrique Vila-Matas’ work, containing over thirty of the essays that shaped his subsequent fictional landscape. El viajero más lento brings together a foundational ‘Vilamatian’ macro-cosmos of cities, characters, interpretations, conversations, real and invented situations and settings. With two unpublished pieces (El arte de no terminar nada and Café Bénabou), it constitutes, moreover, a roadmap containing vital clues for identifying what later became stories, chapters and characters in his subsequent books.

A declaration calling for the creative freedom of the writer, for the power of the reader to continue the journey, for books as living objects and for the literary value of ideas in progress as the germs of works that, as this one did, shoot off in multiple directions.