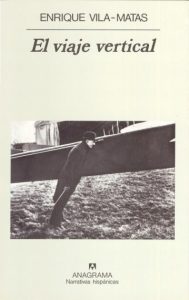 «One of the most curious, original and seductive phenomena of Spanish narrative in our time.» Rafael Conte, Abc

«Immersed in the delicate operation of maintaining sense in the very centre of senselessness, or in other words: of returning intimate coherence to it with a masterfulness that makes him an irreplaceable author.» Ignacio Echevarría, El País

«The best writer in Spain today for a growing sect of fanatics scattered around the world: from Stockholm to Veracruz, from Paris to Cabo Verde, from Lisbon to Prague, from Warsaw to Buenos Aires.» Juan Forn, Page 12

(The Vertical Journey). There is a circular journey, the kind where you return to the place you set out from as described in the Odyssey. But there is also a journey with no return; the rectilinear odyssey with no Ithaca to transform the individual who will never return home. Within this second type of journey we should include the original vertical journey on which, both geographically and in life, the main character of this novel – septuagenarian  Frederico Mayol, businessman, poker player, Catalan nationalist – sets out, when the day after his golden wedding anniversary he feels surprisingly and absurdly obliged to leave his married home forever.

As always in Enrique Vila-Matas, the phantoms of ageing, solitude and madness abound and spark off the dilemma between survival and suicide. On this occasion it happens in the form of a vertical journey which is, in terms of its geographical path (Barcelona to Porto, stopping off in Lisbon and again in Madeira to finally sink in the strangest of final destinations) an Atlantic novel and at the same time the story of initiation to culture. In other words, the classic learning novel, if it weren’t for the fact that the main character is of an age when generally nobody learns anything.

And at the bottom of the whole story, is the drama of a generation of Spaniards who saw their cultural education and republican freedom truncated by the Civil War and the years of barbarity that followed.