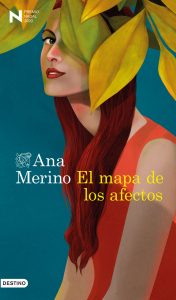 “Merino makes her novelistic entrance in a big way––not just because she won this year’s Nadal Prize but because, more importantly, she has done so brilliantly. For a debut work, this novel shows surprising narrative maturity, trapping readers with the very first line and dragging them off into an unknown world. The end result is a mosaic in which every piece fits perfectly, an inlay composed through a comprehending eye turned to human life. An oasis amid the inclement space surrounding us.” Ascensión Rivas, El Cultural (El Mundo)

“If literature can still save us, it is because there exist books like The Map of the Affections by Ana Merino, an artist with words and an empathetic and brilliant writer of deep meaning and sensitivity. Her narrative debut is a penetrating look into the immediate world. Merino writes with refreshing mastery, without losing the thread in a landscape that draws us in to the very end.” Joaquín Pérez Azaústre, La Esfera de Papel (El Mundo)

“This tableau of lives is a representative portrait of the world today, with its disturbances and evils––particularly abuse and injustices against the most vulnerable––that are never described antiseptically, but are instead explicitly denounced … Well written, with an agile rhythm and staging of its different episodes, it offers us hours of reading as welcome as they are pleasurable.” Ana Rodríguez Fischer, Babelia (El País)

“Ana Merino has perfectly portrayed a collective and each of its individual members at the same time, the dramas they share while only rarely finding consolation, with the constant threat of loneliness looming over them. This makes us witness to the contrast between the rigors of present and past. For the narrator, “getting all my memories in chronological order” is the hardest thing, but she achieves it with natural mastery, never needing to put on a show.” J. A. Masoliver  Ródenas, Cultura|s (La Vanguardia)

“A magnificent novel. Ana Merino’s writing is unique because her prose is filled up with images that only great poets can create. Her poetry is not defined only by the rhythm, it is, most of all, defined by the way she sees the world: just like in those old stories of good versus evil, whose narrative wisdom Merino has used so well in this original novel.” José María Pozuelo Yvancos, ABC Cultural

“Merino offers a great closeness to the characters, yet a raw, stark, sad, and penetrating closeness. Every slice of life she tells us about leaves a mark, an affection (the precision of the title!), the evidence that in any corner of the world, however lost and hostile, there is a beating heart.” Ignasi Aragay, ARA

Valeria, a young schoolteacher in a secret relationship with Tom, who is thirty years her senior, is confronted with a sentimental dilemma and wants to understand the meaning of love. In the tiny town where she lives, Lilian disappears without a trace while her husband is on the other side of the world. Obsessed with women, Greg, frequents a brothel on the outskirts of town to get away from his problems, until he gets found out in the worst way possible.

Through moments like these that make up the life of a small rural community, we are plunged into the day-to-day mysteries of its inhabitants. Not only will their lives cross over the course of fifteen years, but they will be influenced by the magnetic force of affections, the randomness of chance, the poetic justice that at times gives rise to the most unexpected occurrences.

The map of affections follows the trail of the people who make up the hidden stories of places––places that evoke absences and strange events, where inexplicable crimes take places, where private and family tensions abide and the drive for goodness is the only thing that permits people to go on living.