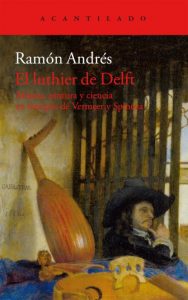 How can one man know and write so much and to such a high standard as Ramón Andrés?” Antonio Muñoz Molina

“Ramón Andrés has indeed returned to surprise us all, not so much or not only with the vastness of his learning, allowing him to straddle the sciences, literature and the arts with nonchalant poise, but rather to dazzle us with a tale that meanders before striking at the heart of the matter, a true universality interwoven with spellbinding miniaturist touches”. Francisco Calvo Serraller, El País

“How can one man know so much, about such an array of subjects, in such detail, while explaining them with such clarity? The Luthier of Delft is the map of a country and an era, containing constellations of diverse subject matters, guiding the reader though the music, the philosophy, the science and the life of the Netherlands and part of Europe between the 16th and 18th centuries”. Perico Pastor, La Vanguardia

“The spell cast by this book is due not to its content, but rather its form. The absence of any pretention, the subtlety freighted with meaning, the breath-taking poise with which it treads the fine line between one idea and another, the sober compassion with which it portrays a shattered world, are what makes this a reading experience quite unlike any other. A veritable treatise on the role of music in painting and a true adventure of aesthetic thought”. José María Parreño, El Mundo

“In yet another display of extraordinarily erudite and elegant research, Ramón Andrés treats the instrument with the deft touch of his sublime prose and cloaks it with a breadth of historical expertise that no other specialist in the subject can hope to match”. Toni Montesinos, La Razón
“With his encyclopaedic knowledge, the musicologist Ramón Andrés has now trained his sights on the Holland of Vermeer, Spinoza and the composer Sweelinck. A work that defies classification, taking in the painting, the philosophy, the music, the science and the optics (among other subjects) of the 17th century in what was at that time Europe’s most cosmopolitan and prosperous nation”. Pedro Unamuno, El Mundo

“With eclectic ease, the author moves from the compositions of Sweelink to the breakthroughs made in optics; from the perfecting of musical instruments to the flowering of Dutch overseas trade, bringing with it the finest wood, to the role played by women and the Jews in all this. Borne along any his effortless erudition, despite the author’s misgivings about those who would make such a claim. Ramón Andrés is one of contemporary Spain’s most inimitable essayists”. Iker Seisdedos, El País

“The books of Ramón Andrés reveal the universality of his gaze, the rich variety of his interests, concealing the beating heart of a refined humanist and a zeal for expert knowledge.” Antonio Colinas, El Mundo

“Ramón Andrés is a man of wisdom, author of works that are a must for fans of serious music. A wisdom, moreover, shaped by listening.” Félix de Azúa

“A ripe, learned explosion of refined humanism. At once an essay, a study and an account rich in storytelling. It can be read in as many ways as the reader wishes. Written with the rigour, attention to detail and power to evoke that are the hallmarks of this writer of numerous musical and literary works”. Berta Ares, Revista de Letras

“Ramón Andrés brings the 17th century to life from numerous angles, imbuing the period with movement, smell and sound. With a steady narrative pulse and reassuring powers of speculation, the author’s erudition is never gratuitous or defensive, nor ornamental, but rather goes hand in hand with reflection and the telling of his tale. Each of those artists, free to work unencumbered by the tyranny of posterity, display a silent Laetitia vivendi that is one of the reasons why readers will finish this book with a feeling of gratitude and good cheer”. Andreu Jaume, Letras Libres

(The Luthier of Delft)

The Luthier of Delft is an exploration of the music (not to mention the art and science) of the 17th century, with a particular emphasis on Dutch culture. The book revolves around three key figures, the painter Jan Vermeer, the philosopher Baruch Spinoza and the musician Jan Pietrszoon Sweelinck. With this as the starting point, the reader will learn about the construction of musical instruments, their woods and varnishes, as well as the role played by women in art and music, the life of the painters and the symbolic world of their work, the scientific study of optics and the spread of the telescope. A book brimfull of resonance and harmony, wisdom and subtlety.