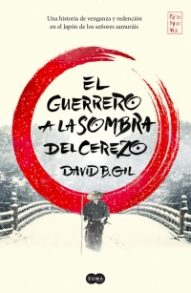 PRH/Suma, 2017 | The Warrior Under the Cherry-Tree

***Best Historical Novel of the Year according to 20 Minutes Newspaper***

«An unforgettable journey to an era full of poetry, mystery and cruelty.» Toni Hill

(The Warrior Under the Cherry-Tree) A story of revenge and redemption among the fascinating Japanese samurai lords.

The last descendant of the ruling house of the province of Izumo, Seizô Ikeda is orphaned one tragic night when his family is put to the sword and his clan’s castle is razed to the ground. At the tender age of nine, he is forced to become an exile from his homeland, a fugitive in the care of Kenzaburô Arima, the last surviving samurai from his father’s army.

On the other side of the county, Ekei Inafune, a doctor cast out for practising the arts learned from the barbarians from the West, finds himself enmeshed in a conspiracy that threatens to bring an end to the fragile peace that has only just begun. Two interweaving lives that will come together at one fateful moment.