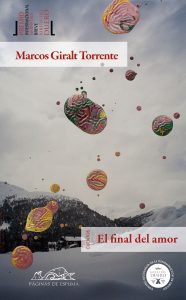 The jury, made up of Mercedes Abad, Jorge Volpi, Ángel Zapata, Javier Sáez de Ibarra and chaired by Luis Mateo Díez, chose El final del amor for the expressive and stylized writing style of its four excellent stories; stories about how love comes together or to an end, and which arouse intense and profoundly mysterious emotions and shocks, by a writer at the peak of his creativity.

“Stories of love at its least sentimental and most richly, maddeningly inscrutable.  A stellar collection of stories about the mysteries of love as it ebbs and flows, from a well-regarded Spanish novelist.” Kirkus - Starred Review

“Giralt Torrente's remarkably precise sentences are as tightly wound as violin strings, his brutal stories coiled like pythons.To read The End of Love is to watch a master storyteller deploy every last trick with as much grace and beauty as a cellist playing a Bach sonata. (…) Torrente not only creates intriguing, nuanced characters but also places them into situations that draw out the profound drama at the heart of their personalities, watching them evolve as they uncover more and more hidden facts. These four remarkable pieces truly comprehend how love works - and why it disappears.” Scott Esposito, SF Gate

"Captivating, subtle, unsettling prose (...) building tension with Bolaño-like accumulation of plot (...) This is Giralt Torrente's first book to appear in English. With luck, the first of many." Booklist

«It´s the leaps in Giralt Torrente’s stories that I find the most thrilling, though, the moments of almost supernatural insight, the unspooling of time, the scenes that Giralt Torrente isolates and makes vibrate through the descriptive power of his prose (…) The stories in The End of Love are a life raft and the ocean around us is wide. Here’s a hand, he says to us. Climb on.» Benjamin Anastas, Bookforum

«Marcos Giralt deserves to be in the front lines of national literature.» Enrique Vila-Matas

«Giralt Torrente shows his skill, his sense of narrative control, his handling of the tempo (in this four stories written) with the depth and compositional lucidity that characterize his work.» J. Ernesto Ayala Dip, El País

«El final del amor confirms Giralt as one of the unavoidable names of contemporary Spanish literature, with a psychological and detailed writing, obsessive in its development.» J. A. Masoliver Ródenas, La Vanguardia

«Giralt Torrente is at the height of his literary career (...) in a prominent place among the young Spanish narrators.» J.M. Pozuelo Yvancos, ABC

“Nowhere else, I mean, not in the songs that talk about the same thing, not in the movies that have been made about this tragicomedy, not on the floors of a department store where you can buy a piece of clothing to survive the end of love, will we find such a thoughtful view, so deep, and so true as in these four stories that Marcos has gathered in El final del amor.” Juan Bonilla

(The End of Love) The four stories collected in El final del amor centre around love and all its possibilities. In Nos rodeaban palmeras (We Were Surrounded by Palm Trees), over the course of a trip to an African island a couple on holiday experience a mutual feeling of distance that seems irreparable; in Cautivos (Captives), a writer witnesses the end of a relationship which the absence of passion was making strangely indissoluble; in ‘Joanna’, a fateful event reminds the protagonist of a never-forgotten teenage love, along with the realisation that it’s impossible for her to carry on; in Última gota fría (The Last Cold Drop), a boy who fantasises about his separated parents getting back together suddenly realises that perhaps this isn’t the best thing for them.

El final del amor marks the long-awaited return of Marcos Giralt Torrente to the genre in which he developed as a writer. Emotion, intensity and depth are the best words to describe this collection in which all the elements join forces to awaken in the reader an urgent need to reach the end.