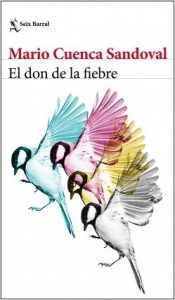 “Cuenca Sandoval’s ambition keeps growing as his approach becomes increasingly polished: set against the symmetric structure of the excellent The Hemispheres, The Gift of Fever moves along superimposing viewpoints and inserting unexpected motifs, without ever losing sight of chronological clarity or luminous writing.” Nadal Suau, El Cultural de El Mundo

“Cuenca Sandoval reconstructs the life of the French composer Olivier Messiaen, while portraying the evolution of the 20th century as a metaphor. And he does so in a work so packed with ideas, so full to the brim with musicality, that at times it is as if he has been touched by much the same heavenly grace that dazzled the French Mozart. In short, a major novel.” Álvaro Colomer, La Vanguardia

“The figure and work of the French composer Olivier Messiaen are laid out in the pages of this delicate novel. Cuenca Sandoval has skilfully combined the ability to remain faithful to events with flights of literary imagination to interpret a particularly complex life and work.” José María Pozuelo Yvancos, ABC Cultural

“A stylistically brillian novel. (...) A narrative option with spectacular results. The narrative of the musician's longings originates a movement towards elevation (the light, the birds and God are his great motives), a characteristic mysticism that Cuenca explains in admirable paragraphs.” Lluís Satorras, El País

«Sometimes awards bring us the posibility to find a not-so-knowN author, who does not have big promotions and who is more interested in his work (both secret and ambitious) than in the market. That’s the case with this year’s City of Barcelona Award, whose winner, Mario Cuenca Sandoval is a rigorous and exquisite writer.» Elena Hevia, El Periódico

“A captivating historical approach to the life and work of the French genius of music.” Natalio Blanco, Diario 16

“One of the most original voices in the current Spanish literary scene takes on a big challenge with success, thus proving his creative skills and narrative abilities. Enlightening.” Pedro Busqued, El Heraldo de Aragón

(The Gift of Fever) A novel with a classical spirit and yet written with the poetic and original style that has earned him the applause of critics and readers in Spain and France.
Messiaen was born with a gift: he has flawless hearing and can identify the quality, timbre and even colour of any sound. Over time he emerges as one of the most celebrated composers in France and the world over. Cuenca Sandoval recounts the life of an artist in thrall to religion, birdlife and music, a musician with his head in the clouds plucked by History and placed on the front in the Second World War, in a Nazi prisoner-of-war camp (where he composes and debuts his most famous piece), as a lecturer at the Conservatory in occupied Paris, and an unusual husband to his two great loves.