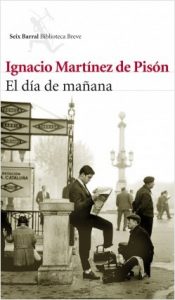 *A six-episodes series for television (Movistar) directy by Mariano Barroso

-Shorlisted for the European Book of the Year 2011

-ESPARTACO AWARD 2012 to the best Historical Novel published in Spanish in 2011 at the Semana Negra, the Noir and Thriller Literary Festival that takes place every year in Gijón (Spain)

*“Justo Gil (splendid Oriol Pla) is a man with all the appearance of having really existed. The archetype, in any case, is well-known and allows to transcend the typical post-Civil war stories. The magnificent cast and setting transport the viewer to an era that maybe you knew or maybe you thought you knew better.” Federico Marín Bellón, ABC

“A masterful writer and journalist, Ignacio Martínez de Pisón immerses himself in the recent history of Spain in a bid to lift the lid on events before and after the Spanish Civil War (…) What leaps off the page are his powers of observation of everyday life. Not the major ideological shifts that alter the course of history, not even the psychological development of his characters, but rather everyday objects, interior décor, hairstyles and modes of transport. His narrative gifts make Pisón the ideal chronicler of Spanish recent history.” Ger Groot, NRC

«Pisón is one of the best narrators of his time and all his books deserve to be read and revisited. El Dia de Mañana is perhaps the finest novel he has written, if not the most indispensable » Javier Cercas, El País

«A great style that seems to have disappeared. I believe that Ignacio Martínez de Pisón has written his best novel yet. » J.M. Pozuelo Yvancos, ABC

«An excellent storyteller… El día de mañana is a sinewy and telling novel about our recent past.» Jordi Gracia, El País

(The Day After Tomorrow) Justo Gil is a recent emigrant who has settled in Barcelona, a bright, ambitious young man who, swept along by the swings of fortune, ends up becoming an informer for the Brigada Social, the regime’s secret police. A dozen memorable characters narrate how they met Justo at some point in their lives and what their relationship with him was like. Their testimonies make up a kaleidoscopic vision of the changing reality of the 1960s and 1970s, while telling the story of the breakdown of an individual whose behaviour and progression help us understand this fundamental chapter of Spain’s recent history - the Transition to Democracy.

Ignacio Martínez de Pisón narrates this fascinating period from within, observing, as only he knows how, the impact collective history can have on the individual, that is, on the lives of ordinary people. On these pages he brings to life the uncertain, fascinating atmosphere of a time when anything seemed possible.