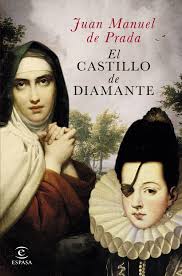 “The Diamond Castle starts from an attractive premise: the complex relationship between two of the most powerful women of their time: Saint Theresa and the Princess of Eboli. From the interactions between the noblewoman and the saint, Prada weaves a complex tale of human passions. Prada’s portrait of Saint Theresa is a triumph of daring: it swings from everyday comedy to the mystical, yet lives and breathes on its own merits. In the hands of Juan Manuel de Prada, these historical figures are brought back to life and demystified, yet without resorting to cliché or crude characterisation. Juan Manuel de Prada has pulled off quite a feat in a book that calls for a fresh, attractive approach to Saint Theresa and her time.” Jesús Nieto Jurado, El Cultural

“The Diamond Castle is a thrilling historical novel that takes the reader on a journey through time back to the Spain of the 16th century. It stars two women of firm character and considerable power who took centre stage in an intriguing clash of interests. A tale told in the outstanding prose of Juan Manuel de Prada, winner of prestigious literary awards such as the Planeta Prize and a best-selling author with a considerable body of work.” Sandra Ferrer, Culturamas

(The Diamond Castle) During the reign of Felipe II, two women —Ana de Mendoza, the Princess of Eboli, and Saint Theresa— waged a battle to the death, each in their own way striving to gain a foothold in a world that sought to crush them. The first, in search of earthly glory, sought to reign supreme among the greats of Spain; the second, seeking full union with the Lord, stood up to religious hypocrisy and outwitted the powers that be.

While both women yearned to see their innermost desires come to fruition, they would end up at loggerheads when Ana de Mendoza called on Theresa to found a convent in Pastrana under her patronage. While Theresa acceded to the princess’ wishes between gritted teeth, it would not be long before sparks flew …

In The Diamond Castle, Juan Manuel de Prada recounts this quarrel with considerable flair and panache, while also looking deep into the soul of two singular, irrepressible women, offering up a strikingly original take on a time in which the most varied expressions of religious faith ran up against the political class. And all of this in a style that draws on the Teresian school of spirituality, the picaresque novel, the esperpento of Valle-Inclán and Cervantine humour.

An adventure in saintliness and the struggle for power depicted in a novel of divine chivalry that takes its rightful place alongside the finest works in the Spanish literary tradition.