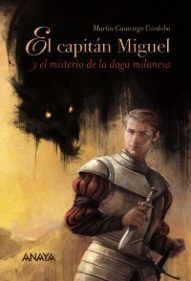 Anaya, 2015 | Captain Miguel and the Mystery of the Milanese Dagger

(Captain Miguel and the Mystery of the Milanese Dagger) XVI century. A remote inland region. After years of peace and tranquility, the brutal murders of young people who have just turned fourteen, are taking place again. Apparently the killer is a wolf.
When the next victim turns out to be the son of a nobleman, the authorities decide to take action. Mr. Monroy instructs the young Captain Miguel to investigate the crimes. Miguel, who survived the wolf attack years ago, is the only one able to stop him, but the monster could be much closer than he believes ... and the only clue he has is a mysterious Milanese dagger.