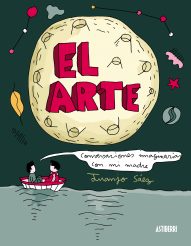 “I had never read any Spanish authors before, but I hit the jackpot when I picked up this magnificent book by Juanjo Sáez, make no mistake. His style, very straightforward and naïf (his characters barely have any anatomical features to speak of) allows readers to give free rein to their own imagination and imbue the story with their own meanings. Something that delighted me, and then some. A simple, beautiful, moving and touching read.” John Green’s blog

«Passionate and stimulating (…) Chapter by chapter, Magritte, Calder, Picasso, Warhol, Duchamp and many others, reveal their incredible strength with total simplicity. Sáez shares the emotions, reflections and revolutions that are triggered by the work with his mother and with the readers… It is malicious, pertinent and clarifying. A book for reading and immediately re-reading.» Nicolas Ancion, Le Nouvel Observateur

“With unique, original delicacy, the young Spanish artist Juanjo Sáez pieces together light-hearted, pleasant conversations with his mother to create a book that is a true declaration of love to the art world.”
Isabela Lapa, Universo dos Leitores (Brasil)

«It remains unknown whether we’re dealing with a graphic essay, a groundbreaking comic, a poetic work or a lucid dream. Without a doubt, it’s all of the above at once – which warrants a single definition: Success!» Clara Dupont-Monod, Marianne

“Juanjo Sáez does not like snobbish art critics and is the enemy of those who defend art as the preserve of a privileged few. The title of the book contains a project: A combination of novels and short stories with an essay on contemporary art.” Dellano Rios, Caderno 3, Diário do Nordeste

“Art, according to Sáez, is Joan Miró, Pablo Picasso and Andy Warhol. But also his friend Rafa, seated before a plate of sausage and beans, as well as the X-Men and Lars Von Trier.” Érico Assis, Omelete

“Juanjo Sáez urges the “common folk” to ask themselves questions about contemporary art and to banish the fear of not understanding it.“ Guilherme Smee, splashpageg.wordpress.com

«Educational and intelligent (…) stands out for its transgressive use of cartoons and text.» El Periódico

«A cult illustrator (…) drawings that are spontaneous, direct, fun and caustic.» El Punt

“As the title suggests, these are conversations that never took place between the author and his mother, who understands as much about contemporary art as the rest of us mere mortals, in other words, not a damn thing. Juanjo Sáez takes no prisoners among his fellow artists and we must doff our hats to him for telling it like it is.  He names and shames his peers and, in the funniest section of the book, calls them out one by one. But there is also room for an impassioned defense of the works of Picasso, Miró, Calder and Andy Warhol. Juanjo is a truly compelling voice and he fights his corner with an unflinching eye that few can match.” Allan Sieber, Fortuna Crítica (ambrosia.com.br)

(Art. Imaginary Conversations with My Mother) Why is it that we all have something to say in front of a beautiful sunset and we feel inhibited in front of a consecrated work of art? Straddling the line between essay, autobiography and novel, Juanjo Sáez reconstructs some of the most interesting chapters in the History of Art. However this is no pompous, dogmatic academic text, but rather the complete opposite. Through an imagined conversation with his mother, Juanjo Sáez invites the reader to reflect on art’s purpose and on the figure of the artist. Calder, Picasso, Warhol, Dalí, Chillida, Duchamp all appear in this sui generis trip through art history that doesn’t shy away from personal reminiscences, calls idées reçues into question and reveals that we can all enjoy art. El Arte, conversaciones imaginarias con mi madre is a book like no other; original, fun and innovative. A fabulous blend of a daring essay with an educational graphic novel.