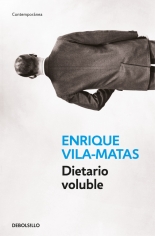 «I love this book –completely unclassifiable– (…) reads like a novel, a really good one, where the narrator gives us exhaustive information about the main character who, coincidentally, is himself.» Pedro Almodóvar at his blog.

«A moral landscape that is chartered through the pages of a diary that can be read like a novel (….) One can’t deny the evidence of his talent.» J.A. Masoliver Ródenas, La Vanguardia

«The best novelist of my generation» J.J. Armas Marcelo, ABC

«After the delectable vulgarity of Baroja, I moved on to Inconstant Diary (Dietario voluble) by Enrique Vila-Matas, which is no less delicious than any of his other major works. (How lucky are those who don’t know how to write badly when it comes so easily to others!).» Fernando Savater, El País

«This is an intelligent and festive book, oriented towards books by other authors (Borges, Sebald, Kafka…), and which doesn’t stop at merely analyzing them, but moreover dialogs with them as if with friends who share the same passions: generosity, the practice of writing as a game and the mixture of “seriousness” and fantasy without ever losing its impeccable rigour.» Amaury Da Cunha, Le Monde

«What matters is his obsession and that’s where Vila Matas’ characters come in, turning circles around an obsession. On the other hand, I think that Vila Matas’ novels are at the most advanced point at which a novel can be. Sebald, Magris, John Berger and Borges form part of this series of adventure writers who are inside a much more modern narrative process than that of the classical novel» Ricardo Piglia, supplement Ñ, Clarín

«One of the most recognisable and unquestionable traits when it comes to discerning and understanding that a writer is truly and genuinely great, is when that writer manages effortlessly and gracefully, always, to ensure that their strongest interest and most intense obsessions and their greatest loves and even the most immense of their hatreds are also our own. Enrique Vila-Matas achieves this with disciplined passion and with unconcealed joy - Duchampian to the end – in his Dietario voluble.» Rodrigo Fresán, Vanity Fair

«I read Dietario Voluble by Enrique Vila-Matas, with progressive and hypnotic fascination, a book that’s as unclassifiable as it is passionate, a disturbing reflection on life itself and literature.» Carlos Boyero, El País

This book covers the last three years (2005-2008) of the personal notebook of Enrique Vila-Matas. Since it is a literary diary with its origins in reading, it is written from the centre of writing itself. It combines the comments made on books read with experience and personal memories, and it breaks down certain narrative barriers and opens up the path for a broad autobiography that constantly seeks to ensure that what is real is seen as an ideal space to accommodate that which is imaginary, and thus create a novel of life. The Dietario voluble does not stray far, either, from Vila-Matas’s most habitual literary procedures, where stylistic differences between works of fiction and collections of essays are decreasingly relevant and increasingly faithful to a happy consignment of hybrid and fragmentary literature where the limits are never clear and what is real dances on the border of fiction, a border that is erased by the rhythm.

It is composed in part by notes that come directly from the writer’s personal notebook in the Sunday edition of El País in Catalonia, but also by important fragments that did not appear in the notebooks and are now published for the first time, and also by notes that were written ex-profeso for this book. More than anything, Dietario voluble is a tapestry that extends in many directions. If Justo Navarro, talking of the Explorers of the Abyss, spoke of “the happiness of relating discoveries in an interplanetary mental graffiti that went from Stockholm to Ronda, Malibu to deepest Russia, from Buenos Aires into space, and where Kafka and Petronio, Bernhard and Burroughs, impossible couples, coincide”, here in the Dietario a new journey is embarked upon, travelling in all the possible directions of the tapestry, and the dancing partners are even more strange, if that is possible: their incessant rhythm erases any dividing line between infinity and the limits.