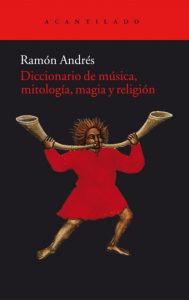 “A monumental dictionary. Poetic, erudite and absorbing. Capable of revealing the thousand faces of myth, of myths, be they Greek, Scandinavian, Celtic or Hindu, word by word, yet each one linking up to the last, creating greater, vast stories in the mind of the reader, who reads on avidly, engrossed in the melody of the words”. Justo Barranco, La Vanguardia

“Can the reviewer allow himself to be swept along? On certain occasions, yes, and this is one such occasion. The release of Ramón Andrés’ monumental dictionary by Acantilado is cause for true celebration in publishing and scientific circles. The book is not only a great compendium with a wealth of deftly assembled information, it also joins the dots between a series of fields of the very latest musicological research and cultural anthropology, highly original and a real boon for scholars”. Roger Salas, El País

“Other have sung the praises of this dictionary in this very newspaper, yet I cannot resist adding my voice to this admiring choir. First of all thanks to the elegance with which this soft-spoken writer shares his incommensurable erudition. Second, as what makes this book such a thrilling read is not merely the readability and rigour of the entries on offer, but also, above all, the ambition of the questions they pose. In his tireless efforts to recreate the moment, Andrés takes us back to the distant past and sheds new light on the present day”. Perico Pastor, El Periódico

“Ramón Andrés, a man of considerable learning and many hours of study, quite possibly at the expense of a good night’s sleep, has a cultural view of the musical art matched by few other music lovers and almost no musicologists, a breed that concerns itself only with pitch, instrumentation, arrangements and the diminished fifth”. Jordi Llovet, El País

“The Navarra-born musicologist has poured his prodigious knowledge into this volume, expertly and tastefully pinpointing the origins, evolution and consolidation of certain figures (Apollo, the flute, Orphism) as they came into contact with new centuries and cultures. This Dictionary is nothing short of a consummate display of the essay-writing art in the most meaningful sense of the word, consisting of extrapolating, interweaving, digressing, correlating and contrasting, taking the many facets of history and tradition as the tools of his trade”. Carles Barba, La Vanguardia

“We are dealing with an exceptional work of reference, but also and above all a delightful intellectual and creative adventure. Much like in the lyre in the sonnet by the 16th century poet Juan de Iranzo featured in its pages, readers will come face to face with the resounding echoes of the absolute”. Antonio Colinas, El Mundo

“At one and the same time encyclopaedic and didactic, this reference dictionary (its entries running the gamut from Ábafis to Zeus) is striking in its dynamism and homogeneity. Music, religion, mysticism and magic are interspersed throughout almost two thousand pages of scholarship in the hands of an author whose books are a yardstick in the world of music”. Toni Montesinos, La Razón

“I know of no better way to alleviate this or to take stock of its scale than to immerse oneself in the Dictionary of music, mythology, magic and religion by Ramón Andrés, the closest thing we have to a Richard Taruskin, an encyclopaedic Robinson who hoards knowledge with the gluttonous zeal of a man who never tires of learning, taking delight in passing on what he has learned. In these impoverished times, in which knowledge is tantamount to dipping in and out of Google and Wikipedia, and in which the idea of sitting down to write a dictionary, and doing so alone, from the first entry to the last, is a somewhat outmoded, albeit charming one, Ramón Andrés has pulled off an astounding feat, the difficulty of which is obscured by the evident pleasure he must have taken in it, and which will hook the reader no sooner have they opened the book at random and begun to read an entry”. Antonio Muñoz Molina, Scherzo

“Ramón Andrés’ great achievement is to have equipped himself with a superb harness with which to venture into the murky cultural origins of music.” Eugenio Trías, El Mundo

“Ramón Andrés is a fine connoisseur and lover of music, as well as a man who cultivates everything music has meant and continues to mean.” Enrique Badosa, ABC

In this unprecedented dictionary, Ramón Andrés, a poet and essayist, not to mention a renowned scholar of music, introduces us to the analysis of nature and sounds, as well as the interpretation of the symbols they contain, to the bond forged between gods and men, which, when all is said and done, constitutes a detailed portrait of the evolution of human thought. Mythologies such as those of the Greek, Hindu, Celtic and Scandinavian varieties allow us to delve into the great legends of Indo-European culture, learning of the heroes transformed into the archetypes of our culture, revealing the symbolic content of the Universe, trees, hallucinogenic plants and animals, which forms part of the extraordinary magical backdrop that witnessed the early history of mankind and which is to be found in music. A far-reaching work that nonetheless goes well beyond the mere consultation of individual terms, but which rather emerges, in its own right and read as a whole, as a readable, entertaining work of reference.