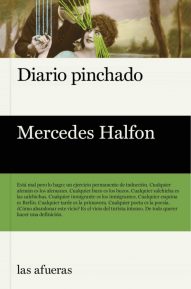 «One of the most interesting voices in contemporary literature.» Pedro Mairal

«With the sensitivity of an opportune observer, Halfon talks about herself when she talks about the world, and vice-versa.» Alan Pauls

«Punctured Diary has the soft sorrow of understanding and intuition.» Martín Kohan

It’s bad, but I do it: a constant exercise in induction. Every German is all Germans. Every diver is all divers. Every sausage is all sausages. Every immigrant is all immigrants. Every corner is Berlin. Every afternoon is springtime. Every poet is poetry. How do I get rid of this vice? It’s the vice of the intense tourist. Wanting to define everything.

Punctured Diary is a short novel in the form of a diary that tells the story of a woman staying in Berlin who feels like a stranger in the city: she can’t get oriented, she doesn’t understand the language, and her meeting with her boyfriend, a poet with a grant who is the whole reason for her going there, doesn’t turn out as she’d hoped. This journal of disenchantment and of a love that falls apart, of estrangement and the art of losing, also contains a reflection about poetry and literature that remains in the shadows. Despite forming part of a long tradition of diarists who have left a record of their passage through the German capital, Halfon chooses in this book an apparently secondary point of view: that of the writer’s companion. And from there, like an ironic and intelligent observer, she reveals to us a world of cracks that light filters through, despite everything.