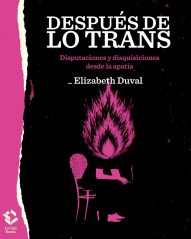 Trans is over. So says Elizabeth Duval. She’s tired of being a young activist instead of a writer or philosopher. She’s tired and she’s bored and that sensation of weariness is the foundation for her rage in this new book, her latest effort to shake of the dunce cap of “trans” identity. But this isn’t autofiction, let alone a pamphlet full of predigested slogans to be repeated. Post-Trans is a visceral and ambitious essay that strikes at the core of the culture wars and struggles over identity in our century. The author takes a broad view of transgenderism informed by science, sociology, aesthetics, and philosophy. She looks for its meaning and detects its limits. What is it? A collective, an adjective, a process of assimilation, or a path to a utopia where gender doesn’t exist? With implacable critical spirit and razor-sharp prose, Duval analyzes these questions and their utility for understanding the diverse and inconsistent reality of transgenderism. In these pages, Elizabeth Duval presents an intellectual tour de force that goes beyond the socialization of gender and notions of self-determination; analyzes the conflicts between trans-activism and trans-exclusionary feminism; takes a stand between the cultural and the neomaterialist left; examines the representation of transgenderism in fiction through Venom; confronts the work of Paul B. Preciado and constant attempts to legislate identity. Through all this, she produces a work that doesn’t hesitate to offer a collective horizon with room for justice, love, and the emotions.