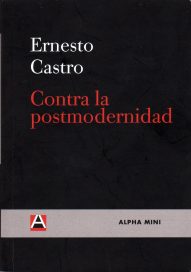 «Casto confronts real phobias, the ones all of us possess as citizens, and for this reason, Against Postmodernity is a disagreeable and hostile book, but also a necessary and urgent one.» Antonio J. Rodríguez

«This book is written in an anti-postmodern style: clear, direct, and precise, without all the rigmarole and baroque phrasing typical of so many studies of the subject. It transmits to us, among other things, the paradoxical way the neoliberal metanarrative has colonized our lives with an appeal to democratic rights.» Paco Barragan, Artishock.cl

Contra la postmodernidad is a polemic against the politics, sociology, and philosophy of the recent past. Thinkers like Zygmunt Bauman, Anthony Giddens, Agnes Héller, Toni Negri, Simon Critchley, Gianni Vattimo, Eloy Fernández Porta, and Jean-François Lyotard are put on trial here. The fallacies of neoclassical economics, the fetishism of radical alterity, and the rhetoric of difference are discussed. Added to this is a rigorous screed against that philosophy that dwells on the suicide of reason, the death of metaphysics, and overcoming modernity. There are also arguments about the crisis of the European project and recent social movements like 15-M and the Arab Spring.

The book’s central thesis affirms that postmodernity ended some time ago, and its categories are inapplicable to a time like ours, marked by grave economic, social, and ecological crises.

We are witnessing the return of class struggle, geopolitics, neocolonial strategies, populism, and ethnic, cultural, and religious fundamentalism. In this context of grand transformations, the normative proposals of postmodernism are intellectually empty and politically useless. The rage for questions of a cultural and identitarian character causes many authors to deliberately forget an economic analysis of the system. This makes postmodernism, in most cases, an exact replica of neoliberal ideology.