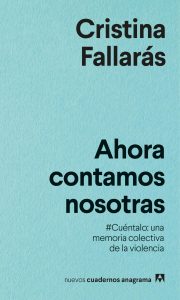 Until recently, you hardly heard anything about the violence perpetrated against women. Not because women were reluctant to tell their stories, but because institutional and media intervention kept things quiet. The #Cuéntalo movement not only shines a light on these silences, but constitutes a collective memory of misogynistic aggression, all narrated in the first person.

Why, over a period of just two weeks, did three million women participate in talking about the violence they’re suffering and have suffered in the past? Why haven’t we heard these accounts before? What are the mechanisms that have prevented women from speaking out until now?