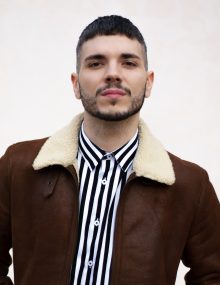 Rubén Serrano (Monóvar, Alicante, 1992) is a journalist specializing in LGBTI+ issues, HIV/Aids, cinema, and television. He began working on these themes with PlayGround magazine in Barcelona. Presently a freelancer, he writes for such media as eldiario.es and El Salto. He also covers LGTBI+ news for the Queer Agenda section of Radio Primavera Sound.

His trajectory has always been associated with the tech world. He has written for Público and Indiespot, and a grant from EFE-LaCaixa allowed him to work as a correspondent for EFE in London. He has also worked for EFE en Valencia, for Cadena Ser, for the magazines Levante-EMV and Información, for Levante TV, and for local radio stations.

He is the voice behind the #MeQueer movement in Spain, which allows thousands of gays, lesbians, bisexuals, transsexuals, and people with other gender identities and sexual orientations to share their experiences of discrimination. He has published texts in the anthologies Assault on Oz: An Anthology of Stories from the New Queer Narrative (Dos Bigotes, 2019) and Rabble and Riffraff. New Gay Voices (Egales, 2019). He is currently working on his first book, to be published by Planeta/Temas de Hoy.