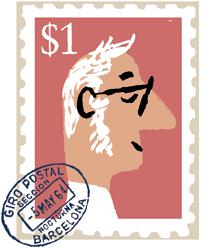 Miguel Gallardo (Lleida, 1955 – Barcelona, 2022) studied at the Massana School of Arts and Crafts in Barcelona, where he lived and worked. He began his professional career combining illustration and comics (he is one of the creators of Makoki, an icon character of the underground in the 80s), and is one of the most acclaimed authors of graphic novels in Spain.

He has collaborated regularly as an illustrator in the daily press and in different national and international magazines and publications such as  La Vanguardia, El País, The Herald Tribune, The New York Times and The NewYorker.

In 2007 he published María y yo (Astiberri), for which he received the Premi Nacional de Cómic de la Generalitat. In 2009 a documentary was made about the book with the same title: María y yo, which was a finalist in the Goya Awards and the Gaudí Awards for the best documentary of the year.

After the re-publication of Fuga en la Modelo (La Cúpula, 2009) with Makoki again among the readers, in 2012 he published the compilation Todo Makoki (DeBolsillo, 2012).

El gran libro de los perros (Astiberri, 2022) is his posthumous work, written jointly with his wife Karin Croo, in which they recount the adventures of Cala, their adopted dog.