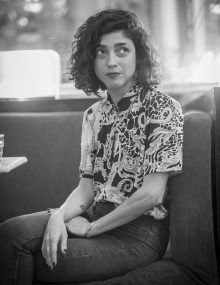 Mercedes Halfon (Buenos Aires, 1980) is a writer, cultural journalist and stage curator. She holds a degree in Arts (UBA) and a Master’s degree in Creative Writing (UNTREF). She currently teaches some classes at the National University of Arts and works as a curator for San Martín Cultural Center, MALBA, Proa Foundation or ARTEBA. She writes regularly for several media outlets such as Página 12. After publishing five books of poetry and establish as one of the most interesting voices of the moment, she has published her first work in prose, El trabajo de los ojos (Entropía, 2017), a bold mixture of autobiography and literary essay on the look and the modes to see.

She is currently working on his next book and a documentary about Juana Bignozzi, one of the most outstanding poets of the sixties in Argentina. The film, produced by Mariano Llinás, will be released in early 2020.