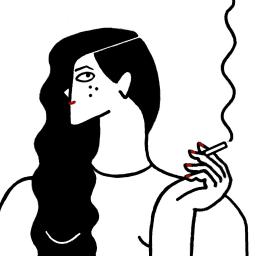 She publishes daily on social media without rhyme or reason, weekly in El País’ fashion supplement S Moda and monthly in the magazine JotDown. Having contributed the illustrations for the non-fiction work Curvy (Lumen, 2016), and publishing her first book as an author, Las cosas del querer (Lumen, 2017), her following published work are Archivos estelares (Astiberri, 2017), Archivos Cósmicos (Astiberri, 2019) and Archivos espaeciales (Astiberri, 2020).